The gray and red squirrels on the deck railing froze in dramatic Renaissance poses as a Cooper’s hawk landed in a small tree directly across from the deck. These poses were held for 5 minutes until the hawk departed. I was hoping the hawk would depart with “the rat.”

In all the decades that I have been here, this is only the second time rats have wandered over from the barns of my neighbors. I was lucky last time. I quickly shot two—which ended the incursion.
Mind you, this is a very healthy, clean, stout rat, and if it was not programmed to endlessly reproduce (like a certain species taking over the planet) I would happily have it be part of the wildlife ensemble outside my window.
Yesterday at dusk I placed some feta cheese outside and sat at an open window for half an hour with a gun to no avail. This is one (if it is only one) wary rat, for it was wandering about all day up until the point of my vigil.
I remember shortly after high-school. . . college. . . who can keep track? I stayed over with a friend that had moved into a cabin in PA that was infested with rats. It was one big room and when he was in bed at night rats would come out onto the kitchen counter. He started taking a gun to bed, blew them away when they took possession of the counter. He said they quickly learned not to wander out when he had the gun in bed with him. Who would have thought they had such quick powers of observation and reaction?
Unfortunately for me, rats’ eyes are on the side of their head and their field of vision doesn’t overlap: A rodent’s eyes can move in opposite directions. If a rat points its snout downward, its eyes look up, rather than where its nose is pointing. If its head tilts down to the right, the right eye looks up while the left eye looks down.
Meanwhile, their whiskers move over all surfaces repeatedly from different angles to get three-dimensional images of their surroundings. This process, called “whisking,” occurs constantly and rapidly—up to 12 times per second—among the fastest movements measured in mammals. 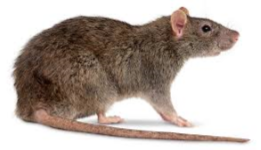 Whiskers do not operate in isolation. The rat senses its environment through hearing and smell, too. In fact whisking and smelling, or sniffing, are locked into the same rhythm so that every time a rat whisks it also sniffs. Thus a shape, texture and smell “snapshot” is transmitted simultaneously to the brain. (info from Li Shen)

This is to say, I am dealing with a very sophisticated wet-ware stealth machine that likes endless sex. I’m hoping my fellow residents on the mountain: the hawks, owls, fishers, foxes, coyotes, bobcats, and weasels will help me take care of this rat visitation.~