Written from a native American point of view, Braiding Sweetgrass (2013) is one of the most unusual books I’ve read. Its author, an acclaimed plant scientist born and raised in the U.S., has been conditioned by the Western European culture we’re all heir to, and writes in full awareness that her audience will consist mainly of non-natives. But her native heritage, and the teachings she has received as a conscious student of that heritage, have given her a perspective so far removed from the one the rest of us share that it transforms her experience, and her perception, of the natural world.

Robin Kimmerer’s relation to nature delighted and amazed me, and at the same time plunged me into envy and near despair.  I would catch myself arguing with her for idealizing her world view, for ignoring the darker realities of life, and for preaching at me, although I agree with every single thing she advocates. Why? Because she made me wish that I could be her, that my own life could have been lived as fully, as close to nature, and as gratefully as hers.

Kimmerer occupies two radically different thought worlds. Her book draws not only on the inherited wisdom of Native Americans, but also on the knowledge Western science has accumulated about plants. She’s completely comfortable moving between the two and their co-existence within her mind gives her a unique understanding of her experience. It also means that her book’s organizational principles are not ones we’re accustomed to, so instead of trying to discern them in an attempt to outline the book, I will tell you about the two chapters that left the deepest impression.

In “Old-Growth Children” Kimmerer tells how Franz Dolp, an economics professor, spent the last part of his life trying to restore a forest in the Oregon Coastal Range. On his forty acres, where once cedars, hemlocks, and firs held sway in “a multilayered sculpture of vertical complexity from the lowest moss on the forest floor to the wisps of lichen hanging high in the treetops,” now there were only brambles, vine maples, and alders. The old forest, a result of thousands of years of ecological fine-tuning, and home to an incredible variety of life forms, does not grow back by itself; it has to be planted.

From his land, Dolp can see the remains of an old-growth forest on top of a nearby peak, the rest of the view being square patches of Douglas fir the paper companies had planted alternating with clear cut fields. Rather than seeing the forest as a commodity to be harvested for profit, the Salish Indians who had lived in the Pacific Northwest for thousands of years preserved the forest intact. The source of all that they needed, from cradleboards to coffins, it provided them with materials for boats and houses, for clothing and baskets, for bowls and hats, utensils and fishing rods, line and ropes. It offered them a rich earthly existence and their culture mirrored this generosity by giving their goods away in the potlatch ceremony, imitating nature in their way of life.

People who lived in the old-growth forest belonged to a community of beings that included humans, plants, and animals who were interdependent and equal. In that environment, says Kimmerer, there was no such thing as alone. In the world view that structures her book the relations between human and plant are likewise reciprocal and filled with caring. Her students conducted a study showing that in areas where sweetgrass was harvested wisely (“never take more than half”) it returned the following year thicker and stronger. In areas where it was ignored, it came back reduced in quantity, thus bearing out the Native American saying: “Take care of the land and the land will take care of you.”

The other chapter that captured me is titled “Witness to the Rain.” Rather than being historical, it is descriptive and meditative. The author spends several hours in the rain one day. She isn’t going for a walk or gathering kindling or looking for herbs; she’s just paying attention. First, she’s attracted by the way the drops vary in size, shape, and the swiftness of their fall, depending on whether they hang from a twig, the needles of a tree, drooping moss, or her own bangs.  Then she listens. Against the background hiss of rain, she distinguishes the sounds drops make when they fall on different surfaces, a large leaf, a rock, a small pool of water, or moss. 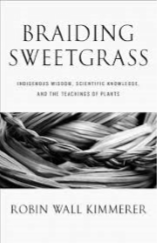 Cold, and wishing she had a cup of tea, Kimmerer decides not to go home but instead finds a dry place under a tree that’s fallen across a stream. Everything in the forest seems to blend into everything else, mist, rain, air, stream, branches. Even the earth, she’s learned from a hydrologist, is mixed with water, in something called the “hyporheic flow.”

This is the water that moves under the stream, in cobble beds and old sandbars. It edges up the toe slope to the forest, a wide unseen river that flows beneath the eddies and the splash. A deep invisible river, known to roots and rocks, the water and the land intimate beyond our knowing. It is hyporheic flow that I’m listening for.

The poetry of nature does not escape this writer and she becomes a poet herself at times, as in the following paragraph from this chapter with which I will conclude.

If there is meaning in the past and in the imagined future, it is captured in the moment. When you have all the time in the world, you can spend it, not on going somewhere, but on being where you are. So I stretch out, close my eyes, and listen to the rain.

If this paragraph appeals to you, then so will the entire book, which is, as Elizabeth Gilbert says in her blurb, “a hymn of love to the world.” ~