WE SURVIVED THE SENIOR PROJECT! – March 2020

An Andes Central School senior came to my door the other day sporting a T-shirt that shouted “I SURVIVED THE SENIOR PROJECT!”  We both grinned and said “Whew!”

The Senior Project: a unique, dreaded and daunting challenge looms before all Andes students. In June of their junior year, Ms. Kathy Whittaker calls the rising seniors and their parents into her room: “What is your passion? Here is your chance to pursue it! You’ll go out on your own, find a local mentor and someone from the faculty as advisor. Think about your passion over the summer. Come in when school opens in September ready to start.” She hands them a handbook outlining the process with deadlines for each phase from September to January.

Working independently on something they feel passionate about is a requirement for graduation from ACS. Fourteen years ago, John Bernhardt, then Superintendent, sent Whittaker and Janine Scinta to a Senior Project Training Program in Myrtle Beach, South Carolina. Whittaker has been the Senior Project Coordinator here ever since.  The goal is to teach them to work independently, reach out for help when they are stuck and observe deadlines so all goes smoothly. The Senior Project seems to be perfectly consonant with the ACS mission: “To prepare students to be caring, productive, responsible citizens in a changing world.”

The program has evolved to meet changing technology and students’ needs. The old “tri-fold cardboard show and tell” has morphed into a power-point presentation on a wide screen; 3”x5” cards are now online. Whittaker meets with the students every day as they progress: focusing their passion, finding and scheduling sessions with a mentor, doing research and writing drafts for the 5-10 page paper. They must create a “product” and write letters of appreciation to those who have helped them as well as their final reflections. Then comes gearing up for the formidable presentation to the community panel of judges.

This January, I was honored to be one of the 6 judges: Jim Andrews, Judy Garrison, Joe Grieco, Joyce Hall, Carol Johnson and I, with Peter Lederman filling in the second day.

The breadth of the 9 students’ interests was stunning. Mazzy Williams had had a summer job in the school greenhouse. Voila! She loved it and worked with her mentor, Jennifer Finkle (of Jen’s Jam and Jelly), and her advisor Ed McGee, who had pioneered the greenhouse and community gardens on the school grounds. She formed a Greenhouse Club that she hopes will keep going after she graduates. She treated the judges to a delectable chicken-pasta dish flavored with basil pesto that the club had created from herbs and garlic they had grown.

Leandra Edelson, on the other hand, reached into her family history and honored her immigrant parents by studying immigration to America. She raised awareness and dollars by putting on fundraisers for the American Immigration Council.

Thomas Anderson presented us with two mounted deer heads to observe and a slice of savory roast venison to consume. He used them to illustrate the NYS laws on hunting and the skills necessary to become a licensed Hunting Guide.

Stanley Andersen relished 6 weeks of coaching a middle-school-aged soccer class in Oneonta. He planned and led skill drills and rewarded the boys with a scrimmage. His mentor, Bob VanValkenburgh, who attended the presentation and praised Stanley’s performance and growth as a teacher, at one point exclaimed, “I love this program; the students are so involved!”

Damien Weaver chose Voice Acting and enlisted Eloise Harris and Marcello Reale as mentor and advisor. He entertained us with an audio tape of a conversation among 3 guys planning a daring exploit. Each had a distinctive voice and attitude. And all were voiced by Damien himself!

For James Camuti’s presentation we moved down to the first floor so that he could include his wheelchair-bound “soon-to-be-stepbrother” and good friend, Trevor, who suffers from Duchenne Muscular Dystrophy. James described the devastating, progressive loss of muscle strength of the disease, its rarity and how it is transmitted genetically from mother to son. He illustrated Trevor’s care by showing a video he had made of Trevor’s physical therapy session. 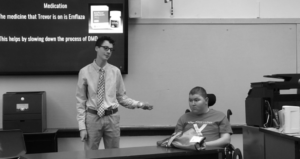 Hunter Kitchen chose Cosmology to study. He designed a poster depicting the Big Bang and its aftermath. Did you know that our universe is still expanding?

Britney Davila, who plans to major in psychology and pre-med studies, explored Dissociative Identity Disorder, commonly called split personality, a misnomer. To raise awareness she had prepared a comprehensive, slick brochure contrasting myths and facts garnered from her research. The rare disorder is a protective reaction to severe and/or persistent trauma in childhood. Britney’s first mentor was so busy treating patients that she bowed out after one interview. Juliette Consigny stepped into the breach and attended the presentation.

Harli Mahon explored the History of Photography She handed us a stunning book of photos she had taken: sharp images of Ballantine Park, the Andes Cemetery, friends and family, a tribute to her passion and skill.

Clearly, the minds of our ACS Seniors have been stretched by this stimulating challenge. As one student put it, “Most of what we do is teamwork. Here I had to explore and make decisions on my own. It was hard work but it was worth it.”

From the cosmos to the humble basil leaf, savoring the deep woods or a gym full of eager soccer players, exploring the journey of a first-generation American parent or the daily reality of a suffering brother, these Andes young people remind us to go out on our own, claim our passion and share it with the world around us~