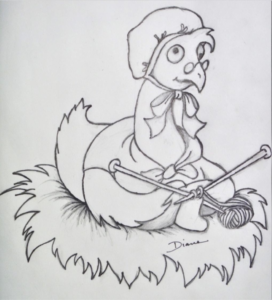 When I first decided to use my own laying hens, I thought that I would “process” the older ones at around 17 months, as I’m told is done on most farms. I guess they’re still edible in soups and stews at that point (meat birds are usually killed at 2-3 months). I don’t really know how edible they are because I just couldn’t bring myself to do it. I had seen processing done many times and thought it was something I could manage to do, but I was wrong.

Oh, what the heck! Let them live! It’s not like I’m running a business that needs to make a profit. I do sell some eggs during the summer, but that is just to help defray the cost of feed. It’s sort of a Social Security plan for the old biddies, with the younger ones paying in to maintain the older ones, who had paid in when they were younger.

I saw an article online discussing reasons to keep old chickens alive. Their first point was important to me because it touched on the main reason I had wanted chickens in the first place: They eat bugs. And the old hens continue to eat bugs. The eggs from the younger ones are just a very delicious side perk. Although, now that I’m used to having a steady supply of them, it would be hard to do without. Supermarket eggs are just not the same! The difference in the taste of eggs from chickens who eat bugs is so great that there’s actually a commercial feed that has insects in it! On purpose! It’s not an organic feed, so I would be suspicious about how they kill the bugs (I doubt they’re alive), but it is advertised “to get that free-range taste.”

I had heard that putting out suet in winter is important for the birds who normally eat insects; that they need the extra fat. It then dawned on me that chickens are birds that normally eat insects, and so maybe they need the extra fats also. I started mixing fats in with their scratch in Winter, and they are indeed healthier, laying longer and living longer. But now I have more old biddies.

Another reason mentioned for keeping the old ones is that they will sit on fertilized eggs, hatching them and raising the chicks. This is not an issue for me because I prefer to buy already-sexed chicks from the store, so that I don’t have to deal with roosters at all. However, I have joked about the old girls “babysitting” the eggs until I come to collect them, and have wondered if this was normal. Apparently it is.

The last reason given for keeping them is that the older hens pass on knowledge to the younger ones. This is important for things like avoiding predators and knowing where to safely find the most bugs. Unfortunately, they also pass along naughty tips like how to cross the road, which plants in my garden are the tastiest, and how to get past my barricades.

March is when I get a new batch of chicks. By late Spring they’ll be mixing in with their elders and learning their lessons. By Summer they’ll start laying eggs, helping to support the old biddies and keeping the cycle going.~