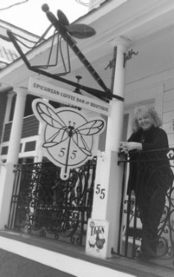 People have been pouring in to this epicurean coffee bar and boutique for a while now for a pour of very possibly the best-you-ever drank cappuccino or chai latte. But not everyone knows about the newest addition to Main Street, at number 55 (Bev Archer’s American Street finished a 10-year run here 10 years ago, and since then it has been empty).

Robyn Ciccone, the owner/proprietor, is proud of the all-around high quality of the beverages and service, as well as the comfortable, soothing atmosphere—patrons can observe the activity in a large fish tank while sipping a flavored latte at one of the lovely café tables. Two of her poodle mix dogs are often frisking about, and guests are welcome to bring their own well-behaved canines.

Robyn, a former southern California surfer girl (I had to dig for this bit), then Virginia Beach resident, worked at Marvel Comics, and more recently as a New Jersey entrepreneur, managing and then owning fitness clubs. Then, after a devastating fire to her husband John’s 80-year-old family business of custom wrought iron railings, she worked with him over 3 years to re-imagine and rebuild it into a hugely successful new iteration of that business. Clearly Robyn is no beginner when it comes to thoroughly researching and then assiduously following through with a business plan. Let me tell her Andes tale of what can seem a saga of synchronicity.

Around 2006 Robyn and John were visiting for the second time at his golf friend’s hunting lodge on Turkey Hollow, and they spied a “For Sale” sign on a nearby Wolf Hollow cabin. Having become quickly captivated by the area, they impulsively made an impromptu offer—which was accepted—and now they were weekenders, weekenders whose visits became increasingly frequent and increasingly lengthy. Five years ago, Robyn—while idly scanning real estate listings on the Internet—found the building at #55 Main Street, a total fluke, she declares. They purchased it quickly, and a year and half later started renovation. The previously gutted building is now totally outfitted upstairs for 2 vacation rentals, available April 1, and the coffee bar/boutique—well you’ll need to see for yourself when you visit. Meanwhile they were wrapping up their businesses in New Jersey, and, as Robyn puts it, were so hypnotized by the Andes area that they went ahead and sold their properties on the Jersey Shore. They were simultaneously mulling the idea of having a weekend business here in Andes. But what kind? In the course of things they purchased the old Barlow Farm on Lee Hollow Road, Bovina, which they are currently engaged in restoring and renovating.

When Robyn determined that she wanted a coffee bar with a boutique she dug into the details. The top-of-the-line Astoria (from Italy) espresso machine, and a Bunn grinder and drip maker assure that every cup has a fresh grind. The shop’s tag line, by the way is “Change Your Grind,” whose meaning, Robyn explains, extends behind coffee beans to life in general. In addition to tagging the motto, she will be tagging all online posts and mentions with “Andes NY.” 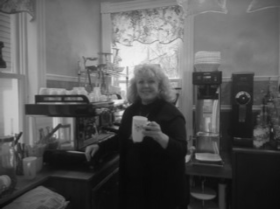 She also sells and will grind varieties of her carefully chosen Café Kreyol coffee, whose tag line is “Creating a sustainable employment in Haiti, one cup at a time,” a source she found after extensive research. Their beans are organically, shade grown, and the company employs a Direct Trade business model, which practices the belief that farmers should get paid based on the quality of their product by paying up to 300% higher wages than what Fair Trade requires. The teas she both serves and sells are the Vahdam brand, from India. Currently there are always fresh pastry offerings. Coming soon and certain to be welcomed by patrons will be cafe offerings, such as 3 different paninis, mini as well as full-sized, and an ice machine for that iced coffee and tea we will all crave in the warmer months. Organic eggs from their 25 laying hens are also here for sale.

I don’t want to neglect to mention the magic of the Dragonfly, which has apparently become the pre-destined name for the business as well as the business logo. One day Robyn became entranced by the glinting images cast on the wall and floor by the etched dragonflies on the Victorian double doors that front the space. At that moment she and John decided that no matter what business they went with, they’d call it “Dragonfly.” Another time a dragonfly circled their heads as they sat at their pond mulling over plans; and one day while held up on Route 28 during road construction, yet another dragonfly appeared in their midst. A recent decision was to keep the boutique offerings thematic: They will soon relate primarily to dragonflies, coffee and tea.

Hours will evolve over time, but Dragonfly55 has been open and immediately popular on winter weekends. Visit their Facebook page for extended hours and other updates. Or take a chance: The Open sign is prominent as you drive or walk by.~