☰ Menu
Browse: Home » 2020 » February » 28 » TOWN SWEARS IN RETURNING COUNCIL MEMBERS, PITCHES IN AT THE TRANSFER STATION AND FINDS A STELLAR SNOWPLOW FOR OUR ROADS – February 2020

TOWN SWEARS IN RETURNING COUNCIL MEMBERS, PITCHES IN AT THE TRANSFER STATION AND FINDS A STELLAR SNOWPLOW FOR OUR ROADS – February 2020

The Andes Town Board met January 7, At 4 pm.
The Organizational meeting began with re-elected Supervisor and Chair Wayland “Bud” Gladstone and Council Members Shayne Moshier and Thomas Hall sworn in by oath. Committee assignments were announced and Shayne Moshier was reappointed as Deputy Supervisor. Also sworn in were John Bouton, Highway Superintendent, Mike Edelor, Fire Commissioner, and Tina Moshier, Assessor.  Those reappointed were Jim Darling and Alex Adelson, to the Town of Andes Planning Board; Rachel Andrews, Andes Pool Director; Dr. Michael Freeman, Town Health Officer; and Roger Roberson, Deputy Highway Superintendent. Cindy Taylor was appointed a member of the Zoning Board of Appeals and Bill  Palmer as Vice-Chair of the Planning Board.

After the Organizational meeting adjourned, the Town Board meeting commenced and Artie Short, Building Inspector’s report on 4 building permits and 6 inspections was announced. Bud Gladstone reported the Well project is moving forward on the School Grounds, but an adjoining land owner needs to be reached about a land ownership/control buffer required by NY State Dept. of Health. The Catholic Church is requesting Handicap parking signs near their church. NYS DOT has been contacted and is working on that approval.

Shayne and Tom helped out Bud and Artie at the Transfer station Saturday, January 4 when the compactor wasn’t working as the dumpster below had filled up completely on holiday leftovers. The problem has been resolved as the full dumpster was hauled away and replaced with a hungry one that must have missed the holidays. Partial payment for the fire cleanup at the Highway Garage has been received by the Town and sent to the company that did the cleanup.

A number of responses to the Comprehensive Plan Survey have been received and more are still receivable until the end of January. Saturday on January 25 the Central Catskill Trail Association will hold an event with fireworks at Bobcat Ski Center. The fireworks permit is approved. 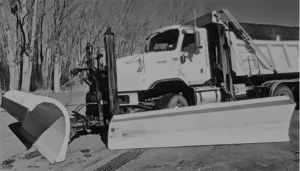 Highway Superintendent Bouton is advertising for a roller through January 28 at 5 pm. The Town is replacing the snowplow lost in the recent fire with a bright yellow 2007 International Paystar 5600 snowplow and salter for not more than $35,000 from the Town of Fabius, Located 22 miles south of Syracuse. Superintendent Bouton and others have examined the truck and found that it fit the Town’s needs. Following discussion with the Council, it has been approved for purchase. A surplus 2009 Freightliner is offered for sale to another municipality. The Board then adjourned at 5 pm and went into executive session on personnel matters.~