For those of us who love the outdoors, have spent time in the wilderness and say they have never been lost, well you have not spent enough time wandering in wilderness hiking or hunting. Most of us who have, including myself, probably experienced being lost or at least that of being “turned around.” I think that my first time, which was also a father-taught lesson, I was 7, 8 or 9. The family was vacationing at Lake George in the Adirondacks and my Dad took me on a hike up to a lake, miles into the wilderness, where there was a well-marked trail to our destination. We made it to this beautiful pristine lake called Jabe Pond, a lake that I have visited often when visiting the Adirondacks. On the return trip we came to a Y in the trail and I nonchalantly started down what I thought to be the right option, Dad following. A short way down he pointed out a rock formation that was not there on the way up and declared that I had chosen the wrong trail. Somewhat confused, I followed him back to the fork where he showed me a scratched-in X on the other trail that he had thoughtfully put there on the way up. Voila. We were now on the right trail, I, somewhat chagrinned, was now a wiser boy and hiker!

Another instance, again in the Adirondacks, but many years later: I had paddled by canoe across a small lake to hunt for that big Adirondack buck-of-a-lifetime. On the other side I followed a small stream that eventually just about petered out, when I saw two does moving along. I followed them a distance, and with the big buck not showing up I decided to head back. At the stream edge I took note that it seemed to be flowing in the wrong direction—very scary. It was now decision time; do I go in the direction that seems to be right in my mind or do I go in the opposite direction and follow the stream? I must admit to being very uncomfortable for at least a half mile when I spotted a large dead tree that I had taken note of on my way in. Hard to describe my joy and relief. Much too macho to convey my misadventure to my hunting buddies upon my paddle back to the other side of the lake!

One more, really quick. Back in the fifties, a buddy and I deep in the Everglades in Florida and camping on the Tamiami trail. It was still a trail back then. We had ventured quite a distance off the trail searching for exotic snakes when we realized that each of us had a different opinion as to the direction back. My buddy, an adept climber, clambered up the tallest tree available and was able to detect what appeared to be the trail off in a direction that neither of us thought right. It was!

All the above plus many a brush with the wild things out there have left me with a yearning for more; not a curse, but a gift.

A correction of an observation made last month: The hairy woodpecker with too much red on the back of his head was not a hairy, but a red-bellied woodpecker. The red-bellied has no red on his belly, but a very large and bright red patch on the back of its head. Go figure that one. There was a report in a nature journal of a red-bellied being taken by a Coopers hawk in December. And speaking of the usually very efficient predator, the Coopers hawk, one crashed into the half dozen blue jays surrounding the feeder one morning, coming up empty-handed, or, better stated, empty-taloned. 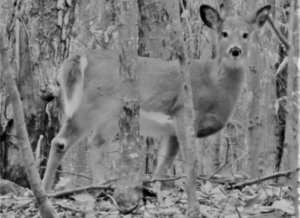 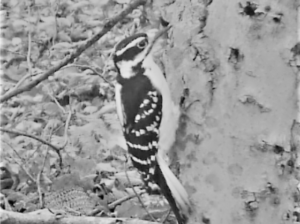 The New Year started out with an abundance of diversity and color under and around the feeder. The pair of cardinals, the male red-bellied woodpecker, multiple-blue jays, chickadees, a couple of mourning doves, dark-eyed juncos, a rare visit by a brown creeper, but strangely no sign of the usually common nuthatch. All this plus the furred interrupters, the red and gray squirrels, but no sign of a black one that had been around last year. Not too bad a start to the New Year for an ardent birder. Oh, and some crows cawing in the distance.

A love of the wild things in our wild forests leaves many of us with a yearning for more, but for now it’s the birds on and about the feeder and, for me, nary a chance of getting lost.~