The memoir by the author of Cutting for Stone, a New York Times best-selling novel that deserved its success, has an intimacy and personal depth that its more ambitious fictional successor lacks. The novel, a sweeping story about medicine and migration, is passionate, intense, and eye-opening. The memoir, which tells the story of a difficult period in the author’s life, has an openness to life and humility in the face of experience that draw you in close and hold you in their spell until the end.

Verghese, a physician of Indian origin raised in Ethiopia, an expert in infectious diseases, has just moved from Iowa to El Paso, Texas with his wife and two boys to take up a position at a teaching hospital; he is also about to  separate from his wife. In order to compensate for the loss of companionship, he becomes fast friends with one of his fourth year medical students, David Smith, a former tennis pro from Australia, who becomes his tennis partner. Their relationship and the drug addiction that overtakes David occupy the rest of the story. The best thing about it: Verghese allows the experience to be whatever it is, not trimming or touching it up for popular consumption.

Driving to work on his first day, high on visions of himself as a person on a spiritual quest, he glimpses, through the window of a medical facility, an aide engaged in turning an old woman over in her bed. “She looked at his face, unable to speak, a prisoner in her own stroke-ravaged brain. And on his face was the set look of a man finding the necessary distance needed to finish work that was not particularly gratifying.”  Driving on, Verghese imagines himself impelled by the same forces that had brought Coronado and Onate from New Spain looking for the City of Gold: “Their failure meant nothing to me. But the sight of that nursing-home window had unnerved me, made me feel as if a giant eye had me in its sights. Look here, the window had said, and I had looked.”

What specific message the window had conveyed he doesn’t tell us, but whatever else it did, it cut him down to size, serving as prelude to the tasks he’s about to undertake, professional and personal: caring for people who cannot care for themselves, attempting to cure the incurable, repair the unrepairable. Presented again and again with outcomes that fly in the face of his knowledge, his skill, and his good intentions, he nevertheless keeps his eyes open and his senses poised to receive what is there in front of them.

Tennis fans will be happy to know that this includes wonderful descriptions of tennis rallies, discussions of the finer points of strategy, and meditations on the styles of great players—MacEnroe, Laver, Lendl. Interspersed with accounts of his patients’ hard lives, and with his efforts to reconcile with his wife, and then, when this fails, to establish a viable life alone, the on-court sessions with his new friend release tension and bring him back to himself again and again.

Verghese envies David’s skill and grace on the court, his command of strategy and the style with which he plays. And, David helps the author with his game. Verghese discovers a magical tennis court set into the side of a mountain with a spectacular view of El Paso and Juarez where the two play, privileged and sequestered. “If our tennis partnership was special, different, sacred, like a marriage, we had finally found a setting to match.”  Still, when not on the court, there’s something slightly off about David. “What I did not see in him was the poise or the confidence I had assumed came with a tennis life. Its absence was the most striking thing about [him].” 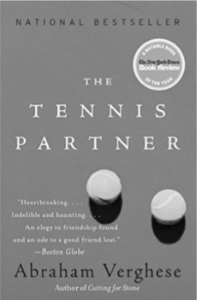 The other aspect of Verghese’s life that forms a background to the relationship is his practice as a healer of patients and teacher of medicine. As in Cutting for Stone, he writes brilliantly about what it’s like to be a doctor. The author’s love for his craft permeates the book, especially his aptitude for discerning the physical signs of disease in his patients. Even walking down the street or riding in elevators, he can’t keep from mentally diagnosing people. This habit, coupled with his encyclopedic learning, makes him an expert diagnostician and also an excellent teacher, modelling for his students the way curious and disciplined observation combined with on the spot record keeping build the storehouse of knowledge necessary for effective practice. Well before the end of the book you’ll wish he were your doctor.

There’s a lot more to say about this book but no space left to say it (I won’t give away the ending). It leaves a lot of questions unanswered, such as whether there’s a sexual subtext to the relationship with David, and why Verghese didn’t write more openly of his feelings in the marriage. But the story is sufficient to itself, powerful and eloquently told. A deep and satisfying probe into the human experience. ~