It is mid-winter when many friends migrate to warmer climes so as to avoid what many of us somehow tolerate and survive. Many of our feathered friends also journey to southern and more hospitable habitats. For them the journey is both long and perilous. Some, like us, who remain and stoically survive what can be very harsh conditions which include our mammalian cohorts many of which avoid the worst by hibernating: think chipmunks, woodchucks and bears, (although bears are not considered by wildlife professionals to be true hibernators). Others remain out there facing occasional subzero temperatures, deep snow, hunting seasons, and for those that are prey species the predations of the various wild carnivores working hard to find a meal.

As to those not true hibernators, our ursine neighbors the black bears that I sometimes call “Macwa” as it sounds scary, I remember many years ago when I would trek up our mountain and down the other side every day even when it required snowshoes (that was then). One-snow-covered day, near the top and on a flat piece of terrain, I came upon a very fresh set of tracks laid down by Macwa. 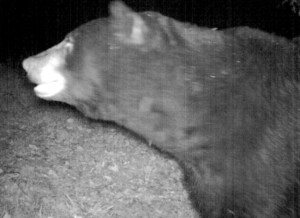 He was out for a mid-winter stroll that bears have been known to do. I do say “he” because I doubt that sows do this as they more than likely would be in the process of giving birth, or nursing cubs while in their stupor. Excitedly, I began to track Macwa, hoping to get a glimpse of him. As I did my somewhat astute brain (again back then), told me that just maybe this was not a great idea and that if I did come upon him he most likely would be quite hungry and possibly mistake me for an easy meal. At this point I retraced my steps. Better a bird whisperer than attempting a tight encounter with Macwa. Recently I read a report that in Romania three people had been killed by bears in the past month and now the Romanians are thinking of returning to the policy of allowing trophy hunting for their bruins. A picture that accompanied the article showed a really large bear lounging on a road, with rather foolish spectators close by. No wonder the three deaths. We also have a very large and increasing population of bears in our Catskills. Do not feed these guys, as the DEC says “a fed bear is a dead bear,” as could be the feeder. Feeding them can become not only a nuisance, but dangerous.

Back in November when hunting season had just opened, I was driving my regular route along Route 30 (by the way, the state did a really great job resurfacing it), and with the Pepacton very low I spotted three does at the end of a then exposed peninsula. They appeared to be contemplating a swim across. I don’t know if they ever did, but it would have been a very long swim; through icy water.  They may be thinking mistakenly they could avoid the guns of Autumn. Considering they had no antlers, I thought they would have been relatively safer not attempting that very long and icy swim; better that they stayed and avoided those hunters with doe permits. I do hope this was their unanimous decision.

An exciting search and chase occurred right outside our kitchen window. Bright sunshine, fresh snow, perfect visibility and there was a mink loping about in search of a meal. He checked every nook and cranny beneath the Norway spruces, the stone wall and even the exterior and interior of the pole barn, and, as he did this, a cottontail, unnoticed by him, bounded across a small field to the safety of a thick briar patch. Unaware, the mink ran past the birdfeeder up to the house, investigated the thick patch of Nancy’s precious plantings, and again—apparently unaware—the sought-after prey, another rabbit, bounded down the drive toward some unseen safe haven. We had seen neither hide nor hair of a rabbit for two months, only glimpsing tracks in the morning snow, indicating that until this episode they had gone completely nocturnal. The mink eventually vanished from view apparently still not satiated. The whole episode was a delight for this ardent nature observer, one that is frequently unobserved in our diverse and wonderful wild surroundings.

The birdfeeder has been adorned in color by the visiting male cardinal and male hairy woodpecker with the brilliant red spot on the back of his head so large that on his first appearance I thought I had a red-headed woodpecker.

The only one I ever saw was on a friend’s property in Pennsylvania. 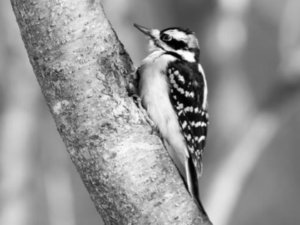 One of our own, born and raised right here in Andes, has been awarded a very prestigious award by the International Shikar-Safari Club. Environmental Conservation Officer Nathan Doig, whose mom by the way brokered the purchase of our property back in 1986. His proud parents, Susan and husband Jack, ran a beef farm off Palmer Hill and reside there still. Nathan and his family live in Walton. The club stated: “ECO Doig is committed to supporting wildlife rehabilitation efforts, capturing and assisting with rehabilitation and release of multiple species.” Congratulations Nathan!~