Evidently, word has gotten out around Birdland that we have the worst strawberries in the area.  Some of them are hard as rocks and taste like paint, and it’s very difficult to tell those apart from the good ones by sight.  Even  humans are sometimes fooled! 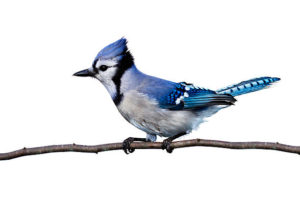 It all started back in early July with The Morning of the Blue Jays. I was in the kitchen preparing what my son calls Granola for Chickens.  I chop up kitchen and garden scraps, and mix them with dry rolled oats to use as Scratch.  Scratch is usually a commercial blend of grains that chickens love (I suspect it’s mostly corn) that is sold to scatter on the ground in order to encourage their natural scratch-and-peck behavior.  My girls certainly don’t need any encouragement in that department, but I find it helpful to keep them busy with my home-made Scratch while I clean up the coop in the morning and refill their food and water.  I also find that the more vegetable matter I get them to eat this way, the less they peck at the plants in my yard.

Anyway, that morning there was a terrible ruckus in the trees around our house, with the distinctive calls of Blue Jays mixed in.  I had sometimes wondered why the tiny House Wrens tolerate my frequent presence so near to the birdhouse that they nest in, it being in the area of the chicken coop. But now I see that my presence is preferable to that of aggressive predators like Blue Jays.  The Wrens and their protected nest were fine in the aftermath of that morning, but the Robins were not.  That day I found a dead female Robin in the driveway, and bright robin’s-egg-blue eggshells scattered in the vegetable garden, along with some Blue Jay feathers.  The male Robin that usually watches over my garden was nowhere in sight and all of the ripe berries were gone.

The Blue Jays did not stay, but the berries continued to be eaten. I soon saw that the Mourning Doves, whose new youngsters were now almost full grown, were taking advantage of the continued absence of my guardian Robin to help themselves to all the tasty treats.  Last year I had seen a clip online about painting strawberry-sized rocks bright red and scattering them amongst the plants in order to discourage chickens from eating strawberries.  They said it works best when done before there are any berries at all so that the chickens learn to ignore the visual cue of bright red among the plants.  My chickens aren’t allowed anywhere near my strawberry plants, so I hadn’t tried it, but now I wondered if this might work with the wild birds.

It did.  One morning I even got to see it in action as a Mourning Dove swooped down right in front of me in order to snatch a bright red rock posing as a berry.  That bird carried on like I’ve never seen or heard before, as if he were cursing as he flew away empty-handed.  Within a week or so, I was collecting juicy sun-ripened strawberries again.  Even the strawberries in another part of the garden, where I had not put any rocks, were left alone to ripen as well.

I thought this protection was carrying over to the blueberries as well.  Maybe it did as far as the Mourning Doves were concerned, because for weeks I had been able to collect all the ripe berries every day, but suddenly the ripe blueberries began to disappear.  It turns out that the little House Wrens that had been growing up safely in the birdhouse had moved out, but not very far.  They are enjoying themselves, feasting on berries…

…but at least not the red ones!~