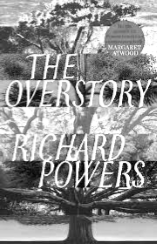 Richard Powers’ The Overstory is a novel for nature lovers. It doesn’t teem with marvelous descriptions of landscape, nor does it teach us the ways of woodchucks and weasels. But I guarantee that if you immerse yourself in it, you’ll emerge a new person—one whose consciousness of trees, of forests, and of the non-human cosmos, has been changed.

The book tells the stories of nine diverse and interesting people, five of whom are environmental activists who burn down a multimillion dollar ski resort before it can open. One of them, a young woman named Olivia, the inspirer of the group, dies in the process. It is her second death. As a teenage druggie, she had accidentally electrocuted herself, and when brought back to life began listening to the presences who visited her in death. They say: “The most wondrous products of four billion years of life need help.” Another member of the group, Mimi Ma, daughter of Winston Ma, (formerly Ma Sih Hsuin, scion of an ancient silk-trading family, an emigre to the U.S., scientist, lover of fishing and music), herself a successful industrial engineer, loses her job when local government cuts down the grove outside her office and she starts participating in street demonstrations that grow increasingly radical; she joins the group, takes part in the action, and ends up as a therapist named Judith Hansen. I won’t reveal the rest. Another group member, Adam Appich, a natural learner labelled retarded as a child, becomes an investigative journalist, writes a story about tree-lovers who live in the branches of a giant redwood for two years in order to save it (they fail; the tree is cut down). As a result he joins the group, then morphs into a distinguished professor of behavioral psychology, until he’s apprehended and imprisoned. Each story is more fascinating and absorbing than the next.

In Adam’s family a different tree was planted for each child at birth. When his baby brother, Charles, is born, Adam senses that the burlap around the root-ball of the black walnut the family has chosen for him is choking the tree. “Adam waits,” writes the author, “month by month, for the choked black walnut to die and take his baby brother with it, smothered in his own clown-coverlet. But both live, which only proves to Adam that life is trying to say something no one hears.”

The “something” that life is trying to say to us is the subject of the book. The trees that surround us (for Powers, trees stand in for all of life), the trees that we never really see, never listen to, never even notice most of the time as we carry on our human-centered lives, have a message that would save us if we could only hear it. What is it, this message? No one way of putting it will suffice. With each re-reading, it becomes stronger, but no easier to articulate. Roughly speaking, it has to do with the wholeness of things.

The novel takes deep dives into history, showing how the roots of a present event lie deep in the past. For example: Douglas Pavlicek, a group member and cargo pilot in the Vietnam war (among other things) is parachuted from his stricken plane into the crown of a banyan tree in Thailand that is part of a small forest which started when a bird dropped a seed from a fig tree, pollinated three hundred years before by a wasp, a seed that sprouted and became a trunk with branches that enveloped its host tree, dropped roots of its own to the ground, roots that grew, dropped their own roots and became the forest whose overstory saves Pavlicek’s life. Everything in life is like this. Storied. Connected.

When Adam Appich, jailed for ecoterrorism, refuses to give up the name of a co-conspirator to shorten his own sentence, and his wife asks “What’s wrong with you? You’re going to put another person’s welfare before your own son?” Adam ruminates: “There it is: the ultimate commandment. Take care of your own. Protect your genes, lay down your life for one child . . . .  Since his arrest he has begun to see . . . the world is full of welfares that must come even before your own kind.” We are connected to everyone and everything.

When Noah built the ark to save the world from its first annihilation, he did not think to salvage plants, the very thing necessary for the survival of animals and humans. As Adam Appich used to say in his lectures: “You can’t see what you don’t understand. But what you think you already understand, you’ll fail to notice.” And what we humans don’t understand, says Powers, is trees. Which we see but don’t see. Which most of  the time we don’t  even notice. At the end of the novel, a famous writer on trees, a recluse, is invited to a conference entitled: Home Repair: Countering a Warming World. She knows the planners, environmentalists all, want to continue doing everything as usual, “burning slightly fewer hydrocarbons” while turning poplar into paper, finding “a genetically altered cash crop that  will build better houses” for a burgeoning population. Their idea of an answer to climate change is “just a slightly less wasteful demolition.” Isn’t that what we, too, have had in mind all along?

The writing in this book is urgent, and exquisite. It grips you by the collar and takes you on a thrilling ride offering a new vision of the miraculous world of which we’re a part. The lives of the characters become our alternate lives, and as we race breathlessly towards the conclusion, we wonder, where is this all going? Where are we headed? The author’s answer is shocking, and is meant to be. Meanwhile, he has opened our eyes, entered our hearts, and given us the science that supports his thesis so skillfully we don’t even know we’re being educated. What he’s teaching here is too big, too important, too overwhelming to encapsulate in language. By the end, the principal feeling is awe. No matter where you stand on the environment, if you’re interested in a new understanding of who we are and where we’re going, don’t waste any time.