RETIREMENT FOR JEFFREY DITCHEK MEANS GETTING A RETREAD – November 2018

If you are even slightly acquainted with Jeff Ditchek, you know there is nothing “retiring” about this man. And in the 3 years since he declared retirement from his consulting company, The Opportunities Group, it is clear that his signature traits of enthusiasm, curiosity, offbeat humor and initiative have, if anything, burgeoned.

Jeff was by all accounts thoroughly absorbed in and dedicated to his work (the number of nights he spent away on business trips in 2008, he once figured, was 189; work often took him to Puerto Rico and sometimes internationally, as well as to most of the 50 states); a colleague acknowledged that Jeff could see opportunities where others didn’t as he helped the blind develop products or services they could sell to the Federal government.

What was his life path that led to developing this unique business, I wondered. Jeff, born in 1949, and his childhood family of 6, had to pick up and move when the Cross Bronx Expressway came through their neighborhood. He graduated from the all boys DeWitt Clinton High School, at that time the largest secondary school in the country. He then acquired an associate degree in engineering, worked for Western Electric, went on to earn a bachelors in industrial engineering and an MBA, doing some of his course work on Saturdays. After years spent as plant manager at a textile company, he began employment with the National Industries for the Blind, a non-profit, and in 1992 he set out to work independently in that field, the only person doing that. 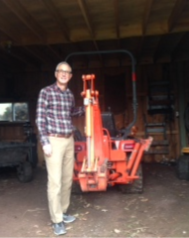 Jeff and his wife, Maria, with their son and daughter, had been vacationing in Andes since the early eighties, along the way building the stately house incorporating a silo that sits high on Herrick Road. In 2009, the couple bit the bullet: they left Clifton, New Jersey and made Andes their permanent home. Jeff and Maria have, over time, enhanced the outdoor environment overlooking their pond, with glimpses of the hamlet and surrounding hills. They designed a patio, raised-bed vegetable gardens and perennial gardens–gardening is Maria’s bailiwick as is all the cooking—(I call it “Tuscany” because of its Italianate ambiance) and, in no time flat, they both immersed themselves in community life.

Five years ago, Jeff started a program at ACS for freshmen called Point to Opportunities in which he arranges for people from diverse professions to talk to students about their work. He volunteers at the Catskill Interpretive Center once a month and recently began offering his skills to the “Repair Café” program of Transition Catskills. He planned week-long group hikes along Hadrian’s Wall in the U.K. and in   the Pyrenees. Back in Andes he participated in trail maintenance projects with fellow hikers, then resurrected Jack McShane’s Andes Hiking Group, rallying folks through email to trek unfamiliar trails, often followed by a tailgate party. Jeff is fond of assembling friends for a simple night out, games of table tennis at the Catskill Recreation Center, or a day trip he dreamed up. I assume it was his restless curiosity and enjoyment of good company that spurred him to start or join all kinds of groups to indulge his wide-ranging interests: a Catskill Geology Club, a fiction book club, bi-weekly pickle ball games, and—get this—a once-a-month Smoker: conversation (male only) over cigars! And we shouldn’t omit the several years in which he was one of the facilitators of the weekly Andes Roundtable, introducing there the monthly showing of selected TED talks followed by discussion.

With Maria and friends—usually dinner out afterwards—he attends the Honest Brook Concerts, Glimmerglass Opera and Friends of Music chamber music concerts in Stamford. He dabbles in painting and crafting objects for home use.

Though he doesn’t verbalize it this way, I’m struck by how Jeff’s range of activities would appear to span the whole human experience: They nourish and exercise the body, the brain and the spirit, including the spirit of fun. A certain kind of traveling can cover all these bases, and the vacations he and Maria take every year seem to do that. They often visit Arizona with its many national parks; once they drove from L.A. to Seattle, stopping along the way in both Death Valley and Silicon Valley; they’ve been to Hawaii and Italy. This year they took a cruise to Bermuda and travelled to North Dakota, where you can bet they discovered much of interest, including the North Dakota Heritage Museum. This trip enabled Jeff to celebrate his 50th state visited (and found himself unexpectedly claiming a “save the best for last” tee-shirt in Fargo.) During the Winter they will drive to Florida, visiting friends and family along the way.

Speaking of family, Jeff keeps in close touch with his 98-year-old father who is thriving at his Boston retirement home, and he and Maria often visit and are visited by daughter Elizabeth, who is now married with 4 step-daughters whom Jeff and Maria have embraced as grandchildren.

When Jeff isn’t engaged in one of his many activities, you may find him home doing yard work  or reading a good book, or welcoming visitors. That he is managing diabetes on a daily basis is easy for others to overlook, but a constant for him.

So, I want to salute Jeff for his enlivening presence in our community (remember the tractor dance, his concept choreographed by David Capps for Dancing in the Park?), and for the reminder his example gives us that we make our own opportunities for building a useful, enjoyable and full life–maybe especially in retirement.~