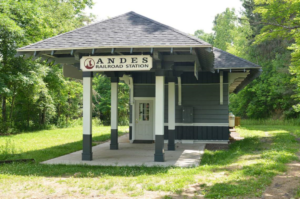 Citizens who wished to speak on the proposed law “regarding permitted film and video productions in the Town and Hamlet of Andes” as well as many with other concerns peopled the seats at the Depot building for a new town meeting experience. (Can’t we always meet here? someone asked.) This reporter believes that if there were an award for polite and well-spoken citizen “complaints” and responsive and non-defensive government reception of such, Andes could win hands down. But first to the 6:45 hearing: Because of disruption that can ensue when a production company comes to town, this law (which was subsequently passed, and will be posted on the town website) mandates charging an initial fee plus clean-up and daily fees. This law doesn’t apply to student and small-scale videos, only to big production companies.

Regarding community use of the restored and refurbished Depot building—with a large area cleared for parking—Town Supervisor Bud Gladstone responded to a question from the floor, saying that the Town hasn’t yet established a basic fee.

The Town Board this evening was missing councilmen Shayne Moshier and Dale Cole, both of whom had recent operations and were reported to be recovering nicely.

Prior to the regular agenda, Bud entertained comments from those assembled. Some of the “unofficial historic concerns group” wanted to be certain the issues with LLC-owned vacant properties are still on the radar and asked for the status of the code enforcement officer’s inspections. Without offering any specifics, Bud reported that he and Art Short are “aggressively working on it.” Frank Winkler, Planning Board chair, referred to their draft proposal which will soon be posted on the website.

A homeowner on Crescent Hill Road who contended that part of his road was unpassable this past Winter offered his suggestion that the capital investment of incrementally upgrading roads—even if this incurs bonding—rather than just repairing, would attract more people to move here and fortify the tax base. A resident from Skyline Drive on Crescent Hill contended that she has waited 24 years for her “subpar” road to be improved and in comic bathetic tones offered hope that these improvements would come before her demise. John Bouton, highway superintendent, and Bud listened receptively to the complaints and commentary. Bouton gave statistics: Last year the increase in paved roads went from 40% to 50%; to go to paved or oil and stone on the remaining 55 miles of road would cost $3MM. The Town currently receives $300,000-$360,000 annually in CHIPS money from the state. He wouldn’t be pinned down as to where on the calendar road work on particular roads fell, asserting that priorities were constantly changing. A road flooding, a bridge being undermined, or weather conditions prohibiting work were all situations causing a revamping of their schedule.

A local restaurant owner raised exception to FoodWorks opening a restaurant despite saying they wouldn’t. He had no beef with another restaurant, but asserted that they should pay property and school taxes on their business as he and other restaurants do. Bud reported that FoodWorks is coming before the Planning Board on October 15th for a public hearing for a special use permit since they have opened a cafe. The taxation issue is a separate one, and he believes the café fits the definition of a taxable entity.

Other mentions: The Sheriff’s Department has been asked to patrol speeding on Delaware Avenue and they have additionally reached out to the State Police. There will be a memorial for Larry Breakstone in Ballantine Park. Three bids for quotes are going out for the drilling of a new, non-sulfur well on school property. Bud will be attending the September 20th Library Board meeting to discuss flood elevation issues. The Highway Department had a maintenance day and everything is in good shape.~