They appeared to be in mortal combat, but could it have been some pre-nuptial or pre-coital dance, just some innocent foreplay? I might discover the answer from a friendly entomologist but I know none; so therefore I will sit back and enjoy the act which looked like a couple of spinning pin wheels. And of course, my ignorance of the purpose of the aerial ballet. The scene was repeated on numerous occasions. I watched the swallowtail butterflies seemingly dancing and roiling happily in mid-air; at the same time each participant appearing to gain dominance over the other. The best encounter came when one decided to investigate the strange and sweaty dude relaxing on an old rustic Adirondack chair. 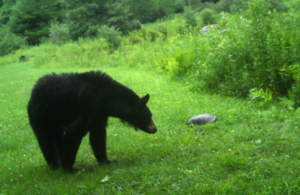 It flittered about, apparently doing a very close airborne inspection and finally landed on my arm, then employed its proboscis, seemingly to check out the taste of my salty sweat. He or she hung around as I remained motionless, then finally flitted off while performing a solo dance. I relished the opportunity to host, albeit temporarily, the beautiful little creature.

Another aerial and rarer performer, seemingly always solo, is the beautiful and endangered monarch, which has always chosen to remain private, especially when feeding on its important food source, our milkweed plants. A perfect example of this was when I was trying to photograph one: It always landed on the opposite side of the bloom and, if not, twisted around to the other side when the camera was raised. I will let the monarchs be private, those noble and shy monarchs. Also, I beg the question, should not females of this species be called matriarchs?

Butterflies are insects, and since they represent the clear majority of all the animal species, consider the following: The eminent biologist Edward O. Wilson has warned, “If all mankind was to disappear, the world would regenerate back to the rich state of equilibrium that existed ten thousand years ago. If insects were to vanish, the environment would collapse into chaos.”

On wild turkeys, which happen to feed on insects and seeds, I have recently heard two very interesting and kind of baffling observations. The first is from my friend Lori who lives over the hill. She related a very weird turkey sighting out on her front field that included three mature toms together, doing their regular feeding, when one held over one spot which seemed unusual as the other two moved about. The individual appeared to be somewhat aggressive with whatever he was tussling with. Lori could not tell, even with binoculars, what was going on. Impelled to go and check it out, she approached the tussling tom. It remained, as the other two made a hasty retreat. The oddball finally departed. So, what was the oddball working on? It turned out to be a dead turkey poult about the size of a crow. The body did not show signs of being fed on, or cannibalized in any way, just kind of roughed up.

I related the story to my son Kris who came up with a somewhat similar story of his own. One year, Fall turkey hunting, he had the opportunity to shoot a Jake, or a young male, out of a group of three that he had called in. 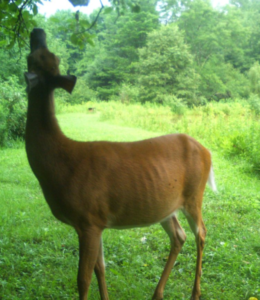 It was a perfect shot as the bird folded instantly, with no flopping around or attempt to fly off. Kris stayed still and watched. What happened next was peculiar: The other two did not fly off in a panic, and one actually went over to his dead brother and appeared to try to raise him up. Kris hypothesized the turkey’s thought as, “C’mon bro. I’ll help you up. You will be OK.” Now I will let you dear readers make your own interpretations of these observations, aggression or Good Samaritan?

After I neatly heaped the cut brush, the emotionally disturbed grouse stepped forward for his usual handout, ate heartily and kept an eye on me as I left. When I brought another load, he stood on open ground, his hunger satiated. I wondered about his safety and sure enough the next day as I approached the location a large hawk, species unknown, launched, staying low with something in its talons which I could not identify. Disappeared into the forest, causing me great concern. No sign of my grouse. Nor did he appear the next day. Finally, on the fourth day, I hiked up, whistled loudly as he had always heeded my whistle, and to my great joy and relief he raced up and eagerly indulged in a handout.

As I have formed a rather unusual relationship with this chesty little critter, the incident got me thinking about his future. 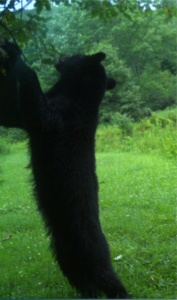 In this active prey/predator world in which he lives he is in the prey group and his life on this planet will be relatively short. At best, he will die of old age and be eaten by a turkey vulture or other scavenger or be taken by a predator and consumed or fed to its young—the natural system. The little guy will have served his purpose in this eat-or-be-eaten natural world. It is what it is, and if I am still around when this happens I will sorely miss him.~