I’m a huge fan of the movie Wild (2014), based on the memoir of the same name, in which Reese Witherspoon  plays a young woman who walks the entire Pacific Coast Trail from southern California to Washington State—1,000 miles, alone—to exorcise the demons that have tortured her since her mother’s death. So when I discovered Torch, which tells the backstory to the events on which Wild is based, I was eager to read it. Although the book was published in 2006, and so is hardly news, it merits attention because of its remarkable strengths, and for its therapeutic effect. It tells the story of the death of the protagonist’s mother from cancer at an early age and of the impact that death had on her partner and two children, a narrative drenched in grief and powered by love.

It’s good to see the movie before you read Torch because the mother in the film, played by Laura Dern, seems perfectly chosen to embody the real life person whose spirit pervades the book. Memoir, novel, and film all testify to her tremendous impact on those she left behind. The telling of the story helped Strayed deal with her overwhelming grief. And once you read Torch, you’ll understand why Strayed needed to write both novel and memoir. Her mother is unforgettable.

Her mother—in the novel, Teresa Rae Wood—works mainly as a waitress in a small Minnesota town to which she fled with her two children from an abusive marriage. Together they live in one room over the tavern where the mother waits tables; she also hosts a local radio program called Modern Pioneers in which she relates her experiments in country living—trying out herbal remedies, dowsing for water, spinning wool from her own sheep and weaving it into cloth. Later Teresa and her kids move into the house they build with the help of Teresa’s common-law husband, Bruce. The description of Teresa Rae’s death from cancer—seven weeks from diagnosis to death—is realistic, wrenching, and beautiful. Afterwards, the well-knit family falls apart. The son, Josh, drops out of high school, starts selling drugs, and impregnates his girlfriend. The daughter, Claire, a senior in college, quits school, has anaffair, breaks up with her long-term boyfriend, and ends up waitressing in the tavern where her mother worked. The husband decides to commit suicide, finds out he can’t go through with it, and falls into a relationship with his next door neighbor, whom he quickly marries. The novel’s ending brings about the kind of resolution that life does: not perfect, but workable. 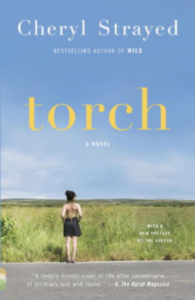 That’s the plot. And it works well.  But what makes the novel outstanding is how Strayed witnesses the emotions that this death puts the characters through. Her descriptions of complex, swirling, confused, and contradictory feelings—more than the impulsive actions they give birth to—make the story worth reading. She is a brilliant observer of the awkward, uncontrollable, often counterintuitive reactions we have to the way life treats us. This includes feeling nothing when we’re supposed to be feeling a lot. Sometimes I couldn’t believe the intricacy with which she traces what’s going on inside these people. I would say it was Proustian, except nothing could be further from Proust than Strayed’s humbly realistic, determinedly Midwestern tone and outlook.

But watch out: If you don’t want your own grief activated, don’t read this book. It’s guaranteed to make you sad. Let me quote from an Amazon.com review—the reviews of this novel from the general readership were more than ordinarily sensitive and insightful. This comes from “Rivka”:

Her comment bears thinking on. In effect, she’s saying that rage, resulting in violent action, is what brings about tragedy, and that what causes the build-up of rage is grief. Unfaceable, unacknowledged, inexpressible grief. The ability to identify, experience, and give expression to one’s grief is essential for life to be livable. The trouble is, tears, along with expressions of pain and sad