I was greatly saddened a few days ago when I came upon a posting on Facebook to Anita Lanziero from Sharon Tucker stating that Mary Tucker had passed away. Saddened because she was one of the first persons I met and became friendly with when we first arrived in Andes in June of 1981.

I saw her every Sunday at St. Ann’s and many times at Bobcat Ski Center behind the counter serving homemade soup. Mary would surprise me when I first started volunteering at the Andes Thrift Shop—she would sit right down in the chair next to me and help me and keep me company for hours. She attended some of my “special” birthday celebrations, and spent time with me at various Andes events and activities. Mary was always a very dear and sincere friend. 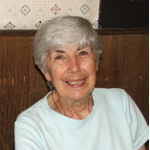 Mary could also bake. I remember her dropping homemade cookies off at Maria’s porch for the Senior Bake Sale on Community Day and looking at all of that yummy frosting dripping all over and thinking, “Why don’t my cookies look that good?” When I needed a recipe for something really exceptional, she gave me her Italian Love Cake recipe, and because of her it was a smash success!

The Facebook posting noted the date for the Mass of Christian Burial to be held May 26th at 11 am at the Sacred Heart Church in Margaretville. At her memorial mass, I arrived early to see all her family and friends arrive at the church. The Tucker family filled in row, after row, after row with her five sons and daughter Kathy, grandchildren and great-grandchildren. They all seemed to have the same face. You certainly can spot a Tucker!

Mary and her husband Howard raised a family of eight children, (two of whom have since passed), making it a family of ten in all. The family started out in Slingerland, then down to Kentucky and finally Bovina/Andes.

From what her granddaughter shared during her wonderful eulogy, Mary raised everyone on good old-fashioned values—influenced by the Depression years of her young life. Everything was used and nothing wasted. One story was of the brown paper bags used for her children’s lunches—they were used and reused over and over, her granddaughter said, until you could see the light shining through the holes on the sides!!

She also recounted stories of when her children were growing up and wanted to go somewhere or do something on their own. She would always say, “Okay, but first you have to tend the family vegetable garden!” If they were late for dinner, they would have to clean up after dinner that night, plus the night it was their turn.

Mary loved to play tennis and gave much of her time to the Andes community, serving on the Andes Gazette Board of Directors, writing a column for the paper, volunteering at the Andes Thrift Shop and Andes Italian Club. She was the secretary for the Senior Club, and an Andes Library trustee.

Sacred Heart Church was packed to the rafters with family and friends—some of whom had travelled very long distances to honor Mary and pay their last respects to this great lady, who was wise, intelligent, talented, and giving. She was a loving wife, mother, grandma, and friend.

The guests were treated to a reception at the Margaretville Firehouse, with a sumptuous luncheon prepared and served by Marianne of Mary’s Cooking.  However, the piece de la resistance was Mary’s own family recipe for her famouns raspberry squares.  They were so good and a final and lasting legacy that will certainly continue on through the generations!

Thank you, Mary, and good-bye my ear friend…~