So I promised something less geeky this month and this certainly falls into the lite category.   While struggling to find this less nerdy fodder the evening before the final deadline when the editors hunker down to rush the copy to press, the muse/editor chirped out an “easy topic”.  “How about ornaments in the garden?”  I love my muse more than anything, but I usually get inspired to write about something other than what she suggests immediately after the offering.  However, in this case I am going with it because it gives me an opportunity to talk about my rocket!

I never get that excited when I am confronted with a lecture about “placing sculpture or ornaments in the garden,” which comes up fairly often in conferences and garden speaker series. I think I have always successfully avoided them as “so what” and here I am writing my own. I have a few overarching thoughts about ornaments in the garden:  firstly, don’t have too many of them, especially small ones; scale is everything; either make them a focal point or tuck them in as a surprise to be discovered; and let them contrast to the surrounding garden elements to maximize their presence.  Ornaments are great to add color and structure throughout the year, particularly in the winter months. 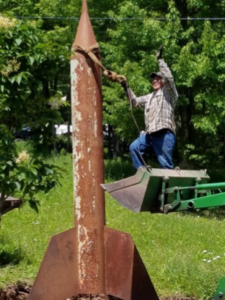 Now let’s talk about my rocket.  It is big!  Many of you may know the rocket. which was in the collection of sculptures by Tovey Halleck adorning the Greek revival house on Route 28 between Andes and Margaretville that was, I think, part of the Andes Sprouts program from earlier times. I have been admiring and saying that I wanted this rusty rocket for years. Well this year for my 66th birthday my dear muse procured the rocket.

So what were the considerations for placing the cylindrical projectile?  The first task was finding an appropriate location in our garden challenged with level spaces. After much thought and considering many possibilities, I finally picked a location pretty much centered in a semicircle left by the first switchback in our driveway.  I chose this spot for several reasons:  There is nothing else going there other than a collection of specimen trees that are small, so it will add a big punch and be the dominant attraction in the area.  Also, the missile is big enough to stand up to the space and without being dwarfed. It is 7 1/2 feet from fin to fin and 14 feet tall; totally sufficient for the scale of the area.  It will be a focal point and a surprise!), as you make the trip up our 600 foot driveway.

The remaining challenge is to paint or not to paint. Given my premise that ornaments should contrast rather than blend, my rocket has a problem. Although part of my attraction to the rocket was its rusty finish and peeling celadon-colored cylinder, unfortunately it blends in with the surroundings and doesn’t really pop. Also, I was concerned that the artist (Tovey), who delivered and helped install the piece, would not want me messing with his creation. However, he said I should go wild with it and make it really sizzle. My friends have strong and differing opinions, but I have settled on contrast.

I am going to paint the fins and the nose cone shiny primary red and the cylinder shiny silver.  That should do the trick to make it stand out and contrast!

If you are making your ornament a focal point, create a worthy setting!  Create a clearing sufficient to provide a frame, a pedestal or something to elevate your object if appropriate. The rocket’s launch pad is a 9 foot diameter circle made of ½ inch diamond plate steel.  I still need to enhance its pad location as we had to do a “cut and fill” operation to create the flat space, leaving raggedy edges. The launch pad needs a retaining wall on the uphill and downhill sides to complete a setting worthy of such a fine rocket.

The other ornaments in my garden are all of the “hidden surprise” variety. There is a red gazing ball in the conifer garden tucked between golden, blue and green-needled shrubs. This little shock of red creates an element of contrast and surprise.  There is a biggish, rusty metal and peeling yellow pig that is stealthily hidden in a sea of perennials during the summer, but is great fun in the winter. The rusty theme continues with some small sculptures by local artists and a barn star on the big arbor. 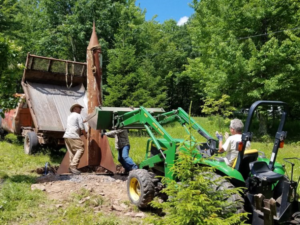 One of my clients recently based a garden around male and female (hard to tell which is which) large modern sculptures that are very cool. The scale is perfection and they are integrated into the garden like giant plants. They are not given a wide berth, but it works very well. Another client has a plastic ape (King Kong?) lurking from behind a pagoda dogwood; a note of humor and homage to a deceased friend who loved the piece. I have another client who has a giant ball of barbed wire sitting on a huge log pedestal in the middle of a meadow. It is a strong focal point with much attention paid to the scale.  And there are many Japanese lanterns and Buddhas to be found in the gardens I tend. “Not that there is anything wrong with it,” but I am happy to say that none of my clients have gnomes in their gardens.~