Winter lockdown is upon us so I will relive a very memorable moment back in October of last year when the leaves were ablaze and the forest seemingly alive with its creatures. There, a ways off trail, I spied, perched on a midlevel branch of a large red oak, a very statuesque, and leucistic redtail hawk. 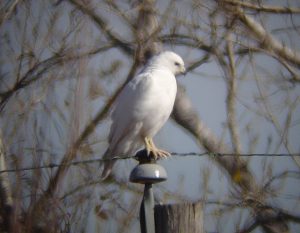 Leucistic is a term for a bird that is uniquely of very light coloring, almost white, but not quite albino. It appeared very content and uninterested as a black squirrel below was busy scouring the ground below for acorns. The little black guy, I think, was aware of the potential dire threat lurking above, as he would occasionally stop his activity and look up and around and could not miss seeing the almost glowing hawk above him.  Apparently not feeling imperiled, he would continue his acorn gleaning activity, ignoring this odd-colored predator looming above. Enemies that they are, it seemed a time out:  the hawk comfortable and apparently in non-hunting mode sat in a contemplative state as the squirrel went about his business relatively unperturbed. Maybe there was a tension between the two, but not recognizable to me. Was the squirrel all the time hyper-ready to race off to safety if the hawk moved? Did the hawk all the time recognize that there was no chance of a successful attack? It was I who finally moved and, with no animosity to either, disturbed the congenial scene and spooked both off to safer places.

The usual suspects are always there; under, over and on the bird feeder, that is. The dozen bullies, the blue jays; the dozen-plus chickadees, working hard when the bullies are absent. Also the ground feeders which are the juncos and mourning doves, and one special guest, a male cardinal outstanding in his brilliant red with his crest always on display. The male evening grosbeak that made a pass a month ago has not returned…yet, I remain hopeful. Even a grouse made a pass according to tracks in the snow. Was it my EDG friend? I do not know.

Far from the backyard feeder, on what I call the Dingle Hill bluff, on Route 30 where the bald eagle nest partially collapsed last year, there has been eagle activity: sometimes one and often two eagles sitting side by side. Are they considering a rebuild and a re-nesting? Only time will tell.

I have often (and again now) referred to our blue jays as bullies, a very demeaning characterization. Once driving on Route 30 I thought I hit one flying low over the road and thought to myself that if I did: “it was only a blue jay,” not a very nice thought.

I have a bumper sticker that states: “That mighty oak is only the result of a little nut that held its ground.” Now I have found out that there is a possibility that the little gravity-bound nut was first leant wings and then planted by a blue jay. This is something called scatter-hoarding where the jay will transport the nuts a significant distance from the mother tree for caching at various places, protecting and concealing them with moss or leaves for future nourishment. Many are forgotten and end up the mighty oak. The jays have a plus for the conveyance – a special adaptation: an expandable crop that simulates a small cargo bay, elastic enough to hold several acorns. With two more in its bill, this can result in a lot of seeding of our oaks. Go blue jays!

On the second day of 2017 I spotted a stranger below our birdfeeder. It was the dull gray of a female blackbird and the right size, but the wrong species in the wrong place as all blackbirds should have migrated to southern climes. She was out of place and did not quite fit the picture of a female grackle or redwing blackbird, so binoculars in one hand and Sibley Field Guide in the other, I made an identification: a female Brewers Blackbird!  She was a drifter way out of place and number 111 of bird species sighted on our Bussey Hollow property in our 30 years! The Andes world of birds seems to be thriving.

I spotted two cottontail rabbits apparently feeling secure cozied up together under the cover of a low branched Norway spruce. Tracks in the snow the very next day showed that a coyote had investigated their redoubt. He then meandered over to the pole barn were he checked every den hole around the edges.

I saw no sign of a kill, but who knows? I can’t imagine living under such a real and constant threat. I do wish them well.  Go find a mouse somewhere, Wiley.

The tricky thing about our natural world and its wild inhabitants is that they don’t always want to play to our rules and wants, if ever. It is a fact that to survive (and survival is the goal of all) many must kill to do just that. I and many of my friends love living in and wandering about wild landscapes, but we are not always prepared to deal with the consequences and realities of nature itself. I forgot to wish Wiley well, although it appears to me he is the high priest of our local wild, and from his calls in the night is faring well without need of my fair wishes. And speaking of Wiley, my friend Ann had a real good look at one as he loped down in front of her on Dingle Hill Road, finally making the leap over the snow bank to the safety of the car-free fields and hills.

We are in the doldrums of winter and it’s best to think this way: If we had no winters, the spring when it comes (and it will,) would not be so pleasant, so hang in there.~