About twenty turkeys (all with the first name Tom) appeared on our front lawn one day seemingly out of nowhere, and never seen before. They seemed to socialize well together, silently taking pecks at the ground with a very rare peck at one another that might have errantly got too close. They drifted up the hill behind the house with no apparent destination in mind. They broke into smaller groups with two individuals left remaining at the front of the house. 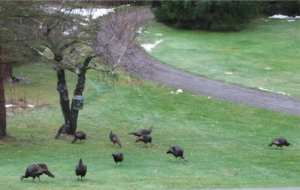 One group of six stayed behind as the others moved on. This one got into a rather loud, seemingly strong, but peaceful verbal debate. I watched and listened from a slightly open kitchen widow. The following is, as Fareed Zacharia would say, “My take” or interpretation of the sometimes loud but congenial conversation. The biggest one: “Look, I am the Boss Tom, yet I am willing to listen to all of you on this subject.” Medium-sized one: “I have been around a couple of years and I believe it would be an error to go up to the big oaks for acorns, as it is open season on us and the hunters know we love acorns.” Another medium-sized:

No apples this year so how about the blackberries near the top of the mountain? It is a known fact that hunters hate the blackberries.” Small one: “I can’t get through those damn briar patches. The tall thornapples produced this year. Let’s go there.” They left the scene in silence and in apparent thoughtful concert. Their final destination is unknown. 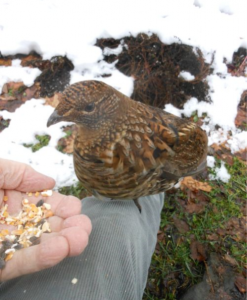 This observation and whimsical translation, very comforting as opposed to a tabloid news report from Davis, California where dozens of wild turkeys have set up home and are bullying and terrorizing local residents. “I got a turkey here that just won’t let me leave. It just put me in a corner,” a 911 call. Wildlife specialists called in are instructing residents: “Be the dominant species, don’t let them intimidate you.” Never in Andes!

For only the second time in my thirty years’ residence wandering about in the woods, I sighted a great horned owl. He appeared massive as he flew off in total silence after my intrusion into his space. He had been perched on the top of one of my many wood duck boxes attached to a tree alongside a woodland pond. Now, was he admiring his very domineering reflection or was he just waiting to surprise and take a potential tenant of the box? Only he knows. The first and only other one I have ever sighted, probably twenty-five years ago, was on a late spring morning. He was carrying off a turkey poult.

Another really beautiful bird not seen in a decade or two was an Evening Grosbeak. A male, bright yellow, black and white wings with a black tail, flashed by the kitchen window, landing in a crabapple tree just outside. Now, these guys usually only show up when northern winters are very tough. Could he be a harbinger of what is to come? We are going into a La Niña type weather pattern according to NOAA etc. which, it is said, foretells a very cold winter with heavy precipitation for the northeast. I have become something of a skeptic when it comes to the weather forecasts and those that believe in them may also be susceptible to the tales of the tooth fairy. We wait in great anticipation and with baited breath.

A couple of blurry pictures sent by my friend Maria of a creature swimming in her pond and then lounging on her small dock appears to be that of an immature otter. The I.D. was difficult as the tail appeared too short although it was most likely curled below so I am going with otter. He will probably be gone soon as he finishes decimating the pond’s fishery. Jeff is just fine with this as the fish can be replaced and the otter cannot.

THE MYSTERY FOX OF

Culled by Judy Garrison from the ‘Andes Recorder of 100 Years Ago’ in last month’s Gazette is the story of a fox on the land of Sherman Woodin that had been found up in an apple tree which hunters of that time could not identify. Judy asked my opinion. Up a tree and described with fur of fine silver gray? I guess at the time the species Gray fox was a rarity and the Red fox, the ubiquitous one. Identifying the creature is quite easy as the Gray fox has retractable claws which enables it to climb trees where the Red fox, like most canines, cannot. The coloring described seals my conclusion. Still most common today is our Red fox as compared to the Gray. This ratio just might be in for a change as our new top predator, (other than ourselves of course,) the Coywolf, has a habit of hunting down and eliminating any other canine in its territory, the Red fox being the most vulnerable. The Gray fox which can escape up a tree might just be able to hold its ground. Just a guess.

“Our task must be to free ourselves…by widening our circle of compassion to embrace all living creatures and the whole of nature and its beauty.”  Albert Einstein~