The ACS Drama Club treated us to a sparkling performance of “Mary Poppins” on Friday night, November 4th.  Winnie Richards (whose Maria in the “Sound of Music” had entranced us) became a crisp, commanding nanny, taking the Banks children in hand and melting into smiles when Burt the Chimneysweep came around. 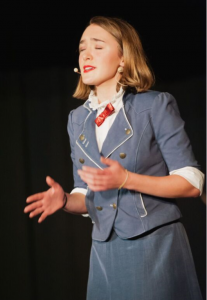 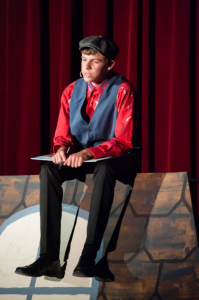 Noah Doughtery’s convincing Mr. Banks ranged from severe, no-nonsense money-man to wastrel. Serena Bacon, as his submissive wife, tugged at our heartstrings while the household help, played with spirit by Taylor Day and Peter James DePierro, furnished welcome comic relief. Front and center, the Banks children: Samantha Camuti, as a stalwart, clear-voiced Jane and James Camuti (who won our hearts as Oliver) a sturdy Michael. On Saturday night some roles were played by alternates as the multi-talented leads were needed on their championship soccer teams.

Superbly directed by Elaine Peck, John Bernhardt, Lisa Valkavich and Jonathan Andrews, the troupe never missed a cue. They tap danced and sang. They magically flew a kite—one moment in Burt’s hand, the next flying up over our heads. Alexis Redden, as a “Holy Terror” of a nanny, stomped and shrilled so effectively that when Mary Poppins flung her off stage the audience erupted in cheers.

A flexible set maneuvered by an adroit, invisible stage crew and spot-on lighting by Alexis Heannings and Russell Storey created the illusion of a very real Cherry Tree Lane. Altogether a delightful evening at the theater! ~