I plan this to be short and sweet if that is possible by this rather long-winded writer for our Andes Gazette, the reason being that my computer was hacked by a ransomware assault emanating, according to my computer repair guy in Fleischmanns, by some hackers based in India. When I attempted to print a hard copy of this month’s piece all my documents and pictures were “encrypted,” resulting in them being unopenable. Shortly afterwards an ominous notification arrived demanding a very large sum of money to be delivered by bitcoin to a location unknown. My computer guy replaced my whole system and was able to retrieve documents that had been backed up before a certain date. All else is gone, including what I had written for this month’s Gazette. WARNING:  Back up all your important stuff and do not open any email that is from an unknown sender or is in any way a little weird. Check it only, do not open it, and send to the spam box.

Now to the reason I write. Solitude is something you all know I love, especially deep in the woods. One early morning I spotted another creature enjoying his own solitude. It was a lone wood duck dabbling about in what we call the woodland pond; I don’t know what he calls it. I silently watched his very private activities until, with sharp eyes, he spotted me observing him and, not being happy with my uncalled-for presence, ducked (pun intended) into some thick reeds. I now backed off to let him continue reveling in his own private solitude. As the duck was not in spring breeding plumage, I could not determine its sex, whether it was drake or hen.

Then there is the other creature that seems not to mind my presence, but seems to seek it. That is the EDG or emotionally disturbed grouse, who temporarily lost his tail (it is a male) to some unknown predator, and is now growing it back. 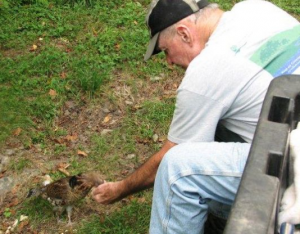 Very interestingly, at one of our encounters he had a buddy along with him who kept his distance. He was not comfortable in my presence, was constantly surveilling the scene, and eventually flew off to some safer locale, uninterested in partaking of the cracked corn that I was handing out. I feel that EDG’s days may be numbered, luck will run out and that predator, which on his last try got only a mouthful of feathers, may one day be successful and have an EDG for dinner. We shall see or maybe we will not. After many encounters and conversations with this little guy, I am now starting to think of myself as a grouse whisperer or maybe just an EDP myself. I am sure that Mel, the woodchuck hater, will concur with the latter.

A critter that Mel should be swooning over is our Wiley Coyote who has interbred with wolves, producing a bigger, more wolf-like eastern coyote or coy-wolf which is now hunting in packs and occasionally taking down white-tail deer. I am sure they are also devouring many of Mel’s much-despised, plant-eating cottontail rabbits and woodchucks. On this we can agree, as a lower deer population, which seems to be the new norm here in Bussey Hollow, will allow for more and better forest regeneration. Culturally and morally we need to live and let live; to let wild things be, and not feel compelled to expel or exterminate them. Nature on its own is in a constant

balancing and rebalancing mode. Aesthetically and ethically, we are a richer, nobler people to the extent we welcome and admire our wild neighbors. A diversity of critters makes our lands wilder, more beautiful and ecologically sound.