Several years ago, I saw the most beautiful plant I had ever seen in the home of my friend, Wilma. It was in full bloom. “What is the name of that plant?” I asked. “Clivia,” Wilma replied, I looked it up.

Clivia miniata is a wonderful flowering plant. Elegant and imposing, it’s easier to grow than an orchid and more unusual than an amaryllis or a Christmas cactus. When given a month of cool night temperatures in autumn, followed by a six-to-eight-week rest period with very little water, a clivia plant will produce dense clusters of orange, lily-like flowers. Equally important, the straplike, dark evergreen leaves are virtually blemish free, making clivia an attractive foliage plant, even when not in bloom. — Chicago Botanical Garden

Years went by and, lo and behold, the library had a plant sale and among the many plants that were donated was a clivia! I snatched it immediately, before someone else saw it, and having read everything I could find about the plant, brought it home and placed it in a spot in my house that I thought was similar in light to that in Wilma’s house, bright but not in direct sun, and was careful not to give it too much water. I waited and waited. Years went by. The dark green, glossy, strappy leaves looked healthy, but it never bloomed! Maybe it had been transplanted and needed more time to recover. 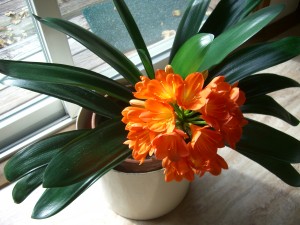 Seven years later, on October 24th, a bud began to appear on a long stem and then another and another! (Similar to the way an amaryllis grows to make a flower except that it was making a cluster of smaller ones on one long stem.) It took about two weeks for all of the buds to open, one by one and become this magnificent cluster of flowers, forming a single enormous one, bright orange with yellow centers.

It lasted for two glorious weeks, when, one by one, the flowers faded and fell. What was left was a cluster of seedpods on the long stem. I’ve read that I could make several clivia plants from those seeds, but they would take years to mature and flower. Alternatively, I can wait for the stem to dry and remove it and, hopefully, the plant will flower again next year. Even without the flower, the plant is worth having, but I hope it will make another breathtaking bloom next year. It will be worth the wait.

In the meantime, just as the clivia lost its last flower, the Christmas cactus (granddaughter of Eddie’s) began to open, another plant that is worth waiting to see in bloom! My Christmas cactus can’t wait for Christmas and seems to rush the season, blooming in November!~