Much continues to go on in the natural environs of Andes, as we all know our natural world is dynamic and does not stop for any beast’s interlude. Missing rabbits, missing songbirds, a lack of turkeys, low deer count and a rogue bear decimating a sweet crabapple tree, all to the side, I will again let Wiley continue his not-so-short lament (final):

“If you read the August issue of the Gazette you now know me and what I am, and that I’m talking to you as I meander down close to McShane’s house. I love to hunt around there during the night as a lot of yummy critters are attracted to the overflow of his bird feeder. If there were snow, tracks would tell me a lot, but now there is none and I am very dependent on my olfactory senses. I am not evil, but if I smell a damn fox, I’ll run him down and kill him and eat him. I just can’t handle another canine creature in my backyard, especially since he is taking my mice. Of course, if he is one of those gray foxes it is likely he will escape as they have retractable claws that enable them to climb up trees. If he is a red fox I have a decent chance of getting him. I know they also hang around the barn trying to get one of my gourmet delights, cottontail rabbits that sometimes den under there. I know some of you Saps might say that hunting down another canine species is just wrong; well I don’t see it that way. Those foxes are competitors for what little foodstuffs we have around here, and I just have to take care of that the best way I can.

I can smell a mouse from a few feet away, but, damn, I can’t smell a fawn as they have almost no scent at all. So I rarely get one. But you know what, those big black bears can, and they are gobbling up a lot of them. Those black beasts have a very keen sense of smell and they are a large factor in controlling the deer numbers, eating up a lot of fawns come spring. It has been said that a bear’s sense of smell is ten times stronger than a dog’s (I’m related) which is 1,000 times stronger than you Saps (Homo sapiens, if you didn’t know). Blacky does have a problem as he just loves the corn planted by them farmers who in turn get nuisance permits from your DEC and shoot every black beast they see. Along with a new early shooting season on them, their growing numbers have leveled off. 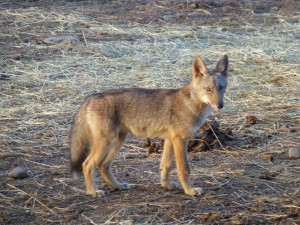 “As to deer, my wife and I would occasionally team up to chase them. We were never successful until one day the snow was real deep with a crust that we could run on top of and the deer were busting through. That gave us a big advantage. We were chasing a doe and her fawn when the fawn got messed up in some thick willows alongside a stream; well we were able to get it. It was a big struggle but the fawn was exhausted and died pretty quick, which was nice. I really like to make a kill quick as possible, but not because of empathy, something you Saps are so damn proud of. My reason is