The cemetery contains a potter’s field (which has since been done away with) and a soldier’s plot where destitute veterans could be buried. The first burial on this soldiers’ plot (located adjacent to the present vault) was the remains of the Jonathan Earle family (including those of the famed Moses Earle of the Anti-Rent war) which were removed from a family cemetery on the Roney Farm down the Tremperskill. Jonathan was a Revolutionary War veteran. Unfortunately, none of the original gravestones were preserved, so the other remains in the grave are unknown. 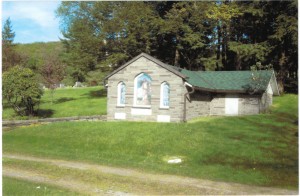 The cemetery pool was constructed in 1938 with money from local contributors and was restored about 15 years ago through a bequest from the estate of Elizabeth Woolheater. The water is fed to the pool from the stream that runs along Coulter Road. After the flood of 2006 badly damaged the reservoir and water source some new piping was installed. This coming year the cemetery board will be examining the reservoir roof, which suffered during the heavy snow this past winter.  Funds are always short, so donations would be appreciated.

The chapel or receiving vault with its beautiful stained glass windows was erected in 1957, again with money raised through local contributions.

The cemetery provides the final resting place for many notable personages in Andes’ past, many of whom helped shape the structure of the community and provided for its colorful history: Andes photographer Charles Carman (1832-1911); Francis Heimer (1828-1910), Andes’ most famous painter (at least locally); Hunting Tavern owner Ephriam Hunting (1803-1880) and his wife Sarah; businessman and banker Duncan Ballantine (1821-1889) and his wife Nancy Hunting Ballantine, who were probably the most prominent residents in Andes during the period 1854-1890; Peter Bassett (1812-1895) was the builder of the old Town Hall–originally called Bassett’s Hall in 1877; Peleg Hilton (died in 1863), owner of Hilton’s Hotel which was the  down renters’ headquarters for the town of Andes during the Anti-Rent wars; Pratt Chamberlain (1819-1884) owned the Central Hotel (now the Andes Hotel); John Bohlmann (1812-1892) built and lived in the library house and operated a tannery on the site of the village park; Rev. James Bruce (died in 1913) longtime pastor of the Presbyterian Church and publisher of the first Andes newspaper; his son, Matthew Linn Bruce, State Supreme Court Justice and onetime Lieutenant Governor of NYS (died in 1936); Silas D. Hilton (1809-1890), successful farmer and merchant who was a prominent leader in the Anti-Rent movement and commanded the “Indian Brigade” when the excitement culminated in 1845; Dr. Jay D. Frisbee, local dentist who was directly responsible for restoring this cemetery and envisioning the beautiful place the cemetery has become.

In the 1890s the cemetery had become a jungle of hay, brush and dead trees.  It looked so bad that many people had their loved ones exhumed and reburied in the newly formed Andes Rural Cemetery on High Street. Doc Frisbee spent countless hours and much of his own money clearing the cemetery and recreating the lawns as they are today. He was responsible for putting in the pool and building the vault. He also was responsible for the design and setting of the Andes Central School. No one could envision a school such as that sitting in the middle of a swamp. Finally, and, perhaps representing the great majority of Andes folk resting in that cemetery, is Cyrus Glendening, a 16-year-old Civil War volunteer from Andes who died of typhoid on March 24, 1863–never having seen battle. Longtime community member and ACS teacher Sylvia Glendening (now resting not far from Cyrus) always placed flowers on his grave because she felt so bad that his young life had been cut short and that he should be remembered.

A walk through the cemetery is interesting with many beautiful monuments to mark the final resting places of the people who, in generations past, worked to make our community what it is today. Former Cemetery Board Member and superintendent J. Edsall “Pete” Hanlon (1892-1972) appropriately had the following as letterhead on the cemetery’s stationery, “The Andes Cemetery, one of the most beautiful cemeteries in the East.” He was right!~