At a Town Council meeting on May 12, Town Supervisor Marty Donnelly announced a public hearing on June 9th at 6:45 on the proposed new Sewer District regulations that will require property owners to keep water running during severe freezing temperatures.

After the Highway Department monthly report was given by Councilman Wayland “Bud” Gladstone, a resident rose to thank Mike McAdams and his crew for their amazing work keeping the miles of town roads open over our severe winter with its frequent snows and plunging temperatures. This accolade was affirmed by the other residents in attendance. The first speaker also expressed appreciation for a mysterious midnight visit by a sweeper-sprayer which recently cleared off the residue of salt and sand.

The Board voted unanimously to sponsor Andes Community Day on Saturday, August 8th.

Supervisor Donnelly hopes that the new Town Court will be open by the end of June. He reported that the depot building is “coming great.”

Councilman Tom Joyce gave a pool report: As we were speaking, the Fire Department volunteers were draining the pool. 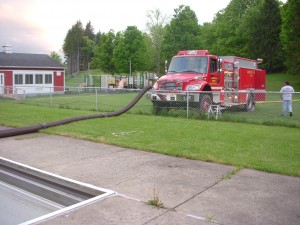 Then the leak could be fixed and the chemical treatment changed to chlorine. Three new lifeguards have been hired, with 2 more applicants to be interviewed, so the pool should be open from June 29th to Labor Day. 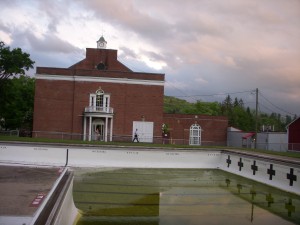 The chair of the Andes Flood Commission, Bud Gladstone, said that they had met with Grayden Dutcher of  Delaware County Soil and Water. They expect to choose a consulting firm to present for approval to the Town Board by mid-August. The consultant will be paid by DEP. As they proceed to select projects for flood mitigation in the hamlet, they will hold public hearings for input from Andes residents. Final approval of any project rests with the Town Board. The Board appointed David Bartlem, an expert in flood mitigation who lives on Herr Road, to serve on the commission.

Finally, Councilman Gladstone gave hearty thanks to Mark Pezzadi, Tom Joyce, Vinnie Comperatore, Dan Mayers and his two children, Petra and Max, from all points in Andes (Mayer Road off the reservoir, Canada Hollow, Gambichler Road, and Palmer Hill) who answered his call to plant 10 donated trees in Ballantine Park. ~