Just after Nancy and I closed on the best purchase of our lives, the old farmstead consisting of 235 acres of woodlands, pasture and hay fields on Bussey Hollow Road way back in November of 1986, I could often be found perched in a tree stand with my trusty bow and arrows hoping for a buck to come by. My interest was not only the chance to get the first meal of venison off the land, but to observe what other varied wildlife might inhabit it. My first evening produced many deer sightings, but none within the range of my bow. However, I was thrilled to hear my first ever howls of a coyote. This may sound strange, but there were very few coyotes in Westchester where I used to do most of my bow hunting, and hearing one was very exciting. Now, as we all know, they have even been sighted in the Bronx and Central Park where I did my first tour of duty as a newly minted NYC police officer back in 1961. My second evening perched in a tree overlooking a well-used game trail, I was totally enthralled to observe a very large bobcat inching its way down the trail with incredible stealth. As it came to within about 20 yards we locked eyes for what seemed an eternity—in reality a millisecond—and then it was gone. I never lifted my bow. This was my first ever encounter with a bobcat and was more exciting and memorable than getting a big buck.

One other unforgettable encounter with a bobcat was just after my farmer friend Marty had mowed the field. I spotted the bobcat hunting and scavenging the many mice and voles whose lives the mowing operation had turned to chaos. Now in panic mode, they were easy prey for the feline. To see a normally reclusive and nocturnal bobcat out at midday is very unusual. The mowing, “a free lunch program,” overrode the nocturnal rule for the bobcat. As the cat worked its way around the field, I devised a plan to sneak down and crawl along a row of yet-to-be mowed hay to a point where I would be about 15 feet from where he was headed. As I waited, a thought went through my mind that maybe, just maybe, I might be too close—too late for that. He appeared and instantly spotted me and again it was momentary eye contact, with what must have been an instant of fight or flight mental mode for this beautiful beast. It chose, and lucky for me, flight. Over 29 years of wandering and working around this beautiful land I have had at least 10 other memorable encounters with our reclusive and rarely seen bobcat—they are always unforgettable and exciting for this avid wildlife enthusiast.

As Wolf Blitzer would say “Happening Now”: the local porcupine has retired from destroying my hemlocks to heavily pruning a couple of weeping willows. This is tolerable as the willows always come back with great strength.

It has been quite a scene as the wild turkey hierarchy is hammered out, sometimes with the strutting toms engaging in real beak to beak warfare. The final result appears to be two top dudes that get along just fine as one is always assigned to chase and harass two interlopers, who are now resigned to their lower status and strut off to the side away from the dominant alphas and feeding hens. There is no dominance and all retreat when the male goose arrives and makes a threatening charge at any who would dare to be near his feeding mate.

More signs of an entrenching spring are the many painted turtles basking on a log in our lower pond, which was put in there particularly for turtle and duck use. Later in the summer they are not to be seen because I believe their black colored shells would overheat in the radiant sun. Mallard ducks are back as are the wood ducks that I do hope take advantage of the many duck houses that have been diligently cleaned (and mice and squirrels evicted.) There are two,attached to suitable trees, adjacent to each pond.  Take heed, Woodies, they are in place for you. Bluebirds are now nesting in a box placed for close observation from our kitchen window and so far have held their ground fending off marauding tree swallows. It is a good idea to always place two bluebird boxes in close proximity, as when there is only one, the tree swallows are very often successful in evicting the bluebirds and taking it over for themselves. Of course if you are a tree swallow devotee, no need. 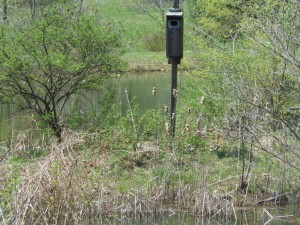 Other “breaking news”; after trimming some trees, I was carting the brush to a location I thought perfect for habitat suitable for cottontail rabbits (also known as rabbitat,) and took note of a partridge in close proximity, moving ever closer and closer. Was it stalking me? No, she had also decided that this location was a perfect and secure place for her nest, hidden close by with two eggs laid. Observing this I made a hasty retreat. Sadly, the iconic bald eagle nest, situated on the Dingle Hill bluff overlooking the Pepacton Reservoir, has broken down, probably because of too much weight on the supporting limbs, as the nest has been added to each year. Now, the pair often sit and look forlorn shoulder to shoulder, and, I presume, commiserating and contemplating what to do next. Plan B: Rebuild here or move on to a new location? I have no idea what they are thinking, but will continue to observe and report.

The neurologist Oliver Sacks wrote, “We are lucky to be sentient beings, thinking animals on this beautiful planet, which has been an enormous privilege and adventure”.  I would add: Let us make our best effort to protect and keep it this way for future generations.~