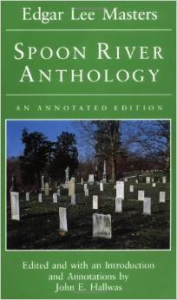 Edgar Lee Masters’ Spoon River Anthology, first published 100 years ago, has been celebrated in recent news programs on this important anniversary. In a groundbreaking, innovative style of poetry, Masters exposed the inner lives of the fictional inhabitants of a small town, mostly based on people he knew, who speak in monologues from the small town cemetery where they are buried. Some are content, some are distraught; we hear from a wide swath of folks, including the violent and sexually maladjusted, their stories often intertwined.

In a scholarly introduction to his annotated version of Spoon River Anthology, John E. Halwas gives us some context: “[Masters] began it without knowing precisely what he wanted to do; he ended it without clearly realizing what he had done.” What Halwas believes Masters has done is to discern the clashing over social issues by the culturally divided populations in the 2 Illinois communities where he grew up: the Yankee modernizers and the agrarian traditionalists. Halwas asserts that those disparate values were also clashing within the poet himself as he pursued a quest to resolve his inner conflicts. In the end, according to Halwas, Masters lands on the side of the rural people of Menard County whom he idealizes as embodiments of the American democratic vision, while disparaging cities and commercialism.

What strikes me in re-reading many of the poems, and having lived in small Delaware county villages for over 40 years (Andes for 20), is that the triumphs and tragedies of most people in rural areas, then and now, are in quite full view of the community over time, a community in which many are fatefully enmeshed.

However, while we can witness many similarities today with the customs of the past—just experience Andes on Memorial Day!—even in those rural hamlets where memories are long and customs persist, there is now infinitely more tolerance for deviations from traditional social conventions. A baby born to an unmarried mother, couples co-habiting outside of marriage, a failed business, personal bankruptcy–once conditions to bring shame and opprobrium—these are treated as bumps in the road when they happen to those we care about. However, someone acting dishonorably or hypocritically or assuming arrogant superiority, will even now soon find the moral weight of the community—or a segment of it—sitting in righteous judgment. Subtle forms of shunning or ostracism might follow. There are still norms of behavior, the violation of which brings down the weight of condemnation.

In our 100 Years Ago column we can’t help but notice how the editor’s voice in the Andes Reporter entries of a century ago often rings out in praise or criticism. This kind of editorial opinion mixed with straight news would violate the standards of journalism today; it can even cause us to smile with its bold inappropriateness. But it does afford us a window into the moral and ethical standards of the day, as well as the exclusionary attitudes toward minorities. We have no way of knowing whether the people of Andes back then experienced inner suffering to the depths of so many of the characters Masters has drawn. We can only hope that many more of them were satisfied with their work and families, fulfilled and comforted by a life well-lived in an enfolding community.~