There will be some distant and maybe some not-too-distant turkey gobbles and booms on the first mornings of May and fewer as the month proceeds. This is because the opening of the wild turkey season is upon us. Tom turkeys are in great jeopardy, especially if they are testosterone-loaded and run to the call of what they might think is a hen desirous of a mate, only to be confronted by a well-camouflaged and concealed hunter with a turkey call in his mouth and a fully loaded shotgun in his hands. 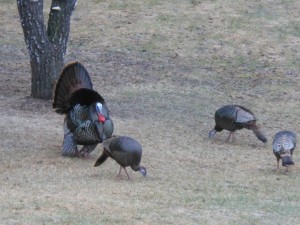 These sometimes gullible and tasty dudes are now on the front lines in the challenging field sport of calling and shooting a wild turkey. This is a difficult endeavor attempting to mimic a lovelorn hen perfectly and then remaining calm, concealed and immobile until that often very distant and wary gobbler is within shooting range, (which should not be more than about 25 yards for a safe and sure shot). Then, if successful, the real work begins: trucking him out, plucking, gutting, yes, beheading, cleaning up, bagging up and then placing in the freezer, the refrigerator or maybe directly into the oven. Hen turkeys are protected in the spring, to keep the population viable. Full disclosure: I have shot 33 wild turkeys in my lifetime, not necessarily due to calling and hunting prowess, but more to the fact that I could spend a lot of time in the woods making the effort. Presently I no longer hunt, although there has been a flock of about 20, including 2 strutting toms, in my yard. Hm-m. Well, no challenge, no way.

Wild turkeys are doing well in the Catskills, their numbers varying over time and from place to place. Other indigenous species such as bald eagles and fishers have recovered phenomenally, with the fisher to be subject to a new “management”  plan by the DEC. Fishers are a large, dark, long haired member of the weasel family that inhabit forested and semi-forested land throughout the state. They tend to be nocturnal and quite shy except when killing and eating a porcupine, their favorite prey. The plan is to extend the season (trapping) in western portions of the state with no changes in our area, as the harvest rate remains below 20% and the population, according to surveys by DEC and Cornell University researchers, is increasing. If you happen to see a fisher, consider yourself lucky. Our postmaster saw one running off with a very unlucky rabbit.

I got “lucky” when my friend Jeff emailed me a picture of a dead deer in one of his fields that he was alerted to by a multiple of very noisy crows enjoying a venison feast. 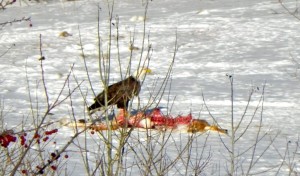 Jeff asked me what I thought was the reason for the deer’s demise. This was back on March 21st and I answered as follows: coyote or bear, although bears were still in den at that time. Some of the flesh gleaning looked surgical, indicating bear; chewed off ribs indicated coyotes. So, I did not know. It could have been struck by a car, made it so far, and then was finished off by any local carnivore. I then said, “Keep vigilant for the opportunity to observe a visiting bald eagle.” The next day he got the photo of the eagle making me seemingly most prescient – bravo!

First redwing blackbird: March 25th; first grackle: March 31st; large flocks of robins on the Tremperskill Road last week in March. All of this may seem like much ado about nothing as you are reading this at the beginning of May, but writing this on the first day of April, with still a foot and a half of snow in the fields and the nighttime temperature at 20°, it is big time. Now it is April 4th and the robins have moved up from the Tremperskill and two chipmunks have popped out of their dens and are searching for sustenance or for a mate; the tom turkeys are in full strut with the hens as usual paying no heed. The call of a pair of Canada geese got me out on the porch to watch them search in vain for some open water on the ponds. No luck. They headed for another hollow, verbally very upset. Today, Easter Sunday, there are now five Canada geese in the little pond that is mostly open. Today, a tragedy almost occurred: the first window strike by a chickadee. Stunned and barely breathing, he luckily recovered without EMT resuscitation. A black squirrel has made an appearance at the bird feeder, the first one in a number of years. Ten years or so ago there were almost as many in black phase as the gray.

After being surprised by a mink that was apparently examining the under-carriage of his car that was parked in our driveway, my son Kris hastened down to a neighbor’s house to investigate the report of an errant porcupine that was snuggled into the corner of her front yard rock wall. The porky was intact but DOA (dead on arrival – cop talk), cause unknown. He recovered it, skinned and salted the skin down so that it could be presented to New York City visitors at his B&B in Kerhonkson, thus allowing them to touch porky quills close up and brag about it to their city peers. When still a teenager, I did try to skin one to make a mounted specimen. It didn’t work.

The latest marauders of the bird feeder are two raccoons that I have labeled, “The two brothers.” 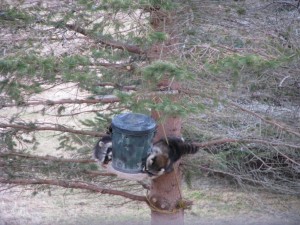 They may in fact not be brothers, but husband and wife, knowing how to balance together on the feeder, while simultaneously sucking it dry. Please guys, leave some for my avian friends for whom it is intended.

“What surprises nature holds for us when we take the time to look” Carl Snyder.~