The snow is so deep I can’t even get down to refill the bird feeder, a chore now left to my good wife Nancy. This leaves me to fulfill most of my wildlife observing and pursuits at the kitchen window where I watch the wild turkeys fly from roosting trees to the corn droppings below the feeder, avoiding the almost impossible task of a trek. It is said that wild turkeys have been known to stay on roost for as much as a week when the snow is so deep and powdery they would be buried in it on the ground. I am happy to see the blue jay bullies giving great deference to a very dominant hairy woodpecker that takes command of the spaceship-like feeder chock full of a mix of cracked corn and black oil sunflower seeds. His dominance over the jays causes them to temporarily abandon the buffet, which gives a short window of time for the chickadees and dark-eyed juncos to avoid the jay tyranny and feed, as it appears they have nothing to fear from this single, top-echelon woodpecker dude. 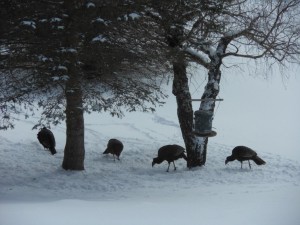 Again, the intrepid cottontail rabbit has made an occasional pass, having so far beaten the heavy odds of becoming fox or coyote fodder. His effervescent bounding, although always from cover to cover, seems to imply an attitude of invulnerability; I do wish him much needed luck. In fact, I hope also that he has a lucky mate somewhere around as we all know it does take two to tango and rabbits are known to enjoy doing the tango, just ask the Pope. You can create habitat for rabbits (which I and others call “rabbitat”) by leaving the tops of trees cut for firewood and crossing them in piles with the larger stuff on the bottom, providing cover. Building brush piles over rocks, stumps and old logs allows access and further protection from predators. I suggest that one not advertise such endeavors so as not to upset your neighbors who may prefer the garden to the wild.

I know this is a while back, but is a very interesting observation; it was February 22nd a Sunday with bright sunshine, 38 degrees, crystal blue sky which actually felt very warm if you remember that the last few weeks had been below zero much of the time. Considering this, it was time to dwell on the porch and smoke a much missed cigar. (Yes, I do smoke about a dozen a year, but like Clinton, don’t inhale.) So enjoying it all, listening to some very noisy ravens and searching the sky for them, I was delighted to see a juvenile bald eagle floating a thermal, but no ravens. Things went quiet for a while and then suddenly there was the sound of a very upset raven and over the top of the trees, there he was, in panic mode with an adult bald eagle right on his tail. They gyrated around very close to the ground with the pursuit finally ending when the eagle seemed to feel that he had enough and lifted off into higher altitude and solitary peace. This was for me a first, as in a harassment such as this the players were always reversed with multiple ravens in pursuit. Maybe this eagle was doing some pay-back for a previous assault and this was justice playing out in nature. Just my thoughts.

A couple of issues back I commented on the pairing bald eagles on Dingle Hill and the fact that I had never observed their aerial mating act. Tom Lake has and describes it in eloquent writing:

“On a Valentine’s Day dawn at New Hamburg a decade ago, I watched a pair of eagles shadow each other over the ice with loop-de-loops and wing touches. At the apex of a long arc in the sky they locked talons – one turned on its back in the air, the other mirrored it from above and they went into free-fall for well over a hundred feet before releasing and flairing out over the ice. At the climax of each acrobatic move they fell away in synchronized flight—flap-flap-glide—both wheeling and banking away in perfect form. It was like an exquisite ballet performance. At times they flew so close to each other that they cast only one shadow, drifting across the limestone face of Cedarcliff. Their effortless yet powerful wing beats moved them through the air as a single bird, communicating through instinct rather than any utterance.”

Boy, if I could write like this I would do it for a living as Tom does. He is the writer and editor of the DEC’s Hudson River Almanac compiling the weekly summary of observations of wildlife by him and many enthusiasts who reside and commute along the Hudson River from the Adirondacks to Manhattan. I am an avid follower of his column online which gives me a grand view of the wildlife activities along the Hudson River. I am now anticipating hearing of our migratory birds’ movements as they slowly return north. I recommend anyone with similar interests subscribe (it is free) by contacting Tom Lake at trlake7@aol.com.

“The last word in ignorance is the man who says of an animal or plant: ‘What good is it?’” Aldo Leopold, conservationist, philosopher & writer.~