The Gazette was invited to cover a joint Ice Rescue Training for the Andes and Beaverkill Valley Fire Departments held at Big Pond. Fortunately, Saturday, March 7th was a sunny day, and as Dale Tait, the Fire Chief and trainer, recounted as he introduced the session, we could be confident that the ice was thick enough not to be a hazard.  However, all the practices would be enacted as though done on thin ice; that, after all, is the condition when a person (or sometimes an animal) falls through and needs rescuing. John Ruchar, Assistant Chief, added that ice is thinnest in a pond where a spring is feeding it, and where the outflow is. Ice fishermen, like those situated further out in the pond on this day, might also be a good source of information on ice thickness and soundness, I thought. It was an old-fashioned Catskills’ winter scene we were in the midst of, out on the ice, and it was going to be fun as well as instructional to be here. It was!

Tait’s first point of emphasis was the importance of reassuring and calming the victim who is likely to be in street clothes, facing hypothermia setting in within 3 minutes, possibly disoriented or thrashing in panic. A quick assessment of the victim’s state of mind is recommended. Tait explained that in the operation of a rescue, only certified technicians should go out on the ice; others in the shore party help the technicians into their neoprene rubber cold water rescue suits, do the rope work, fetch the long reach tool or stoke basket. 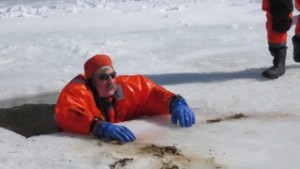 We watched the trainees take turns being the victim in the water. Not Mary and me, thankfully, though the crew playfully threatened us with being “victim”! (they had cut a big block of ice out to provide a hole). The volunteers also took turns acting as primary rescuer and secondary rescuer (depending on the situation there might be times when a tertiary rescuer is needed to haul in a victim, or, if a third person is not on the scene, re-evaluation of method might be necessary). Ideally, Tait said, there are 4 or more technicians on a rescue, with Emergency Squad members on shore at the ready. The protocols say the last choice in a rescue is for a rescuer to get into the water with the victim.

In the practices, the rescuers crawled out onto the ice on their bellies and, either in or out of the water, wrapped the carabiner rope around the victim and secured it. Then, after a hand signal to the ground party, hauling would begin, using a demonstrated hand over hand technique on the rope (Tait recommended that the line tenders wear gloves), while tightening up and pulling, ideally with the victim, if able, assisting in the process by helping to pull himself up and out.

It was interesting to observe the volunteers demonstrate many alternative methods and equipment for use when bellying out on very thin or broken ice would be unsafe. The trainees took turns trying a ResQ Disc (nicknamed a Frisbee) which gets thrown beyond the victim so that it can then be pulled closer (not easy to place precisely, all agreed); the stokes basket; throwline bags; spike poles; and a 14′ extension ladder with its sections roped together.

Tait advised taking location bearings in those situations where state divers have to be called in, such as when dealing with river current and a floundering victim (not likely to be an Andes scenario, but could be in Delhi or Walton).

I listened in to a trading of equipment suggestions and other techniques among the Andes and Beaverkill members.  John Andrews brought up the possibility of using Scott air bottles to inflate the Fire Department’s 100 foot hose which can float, a good choice in the scenario of trying to rescue someone over open water.

When someone mentioned that many of the rescues we hear about result from people going after dogs that have fallen through the ice, Tait and others underscored the importance of responders not putting themselves at undue risk when rescuing animals. Human rescue is the primary aim. Lynn Ritter’s frolicsome dog, Shadow, who was on the scene, was a reminder of the difficulty of reining in a lively animal having fun on the ice.

At the end of the training we were treated to delicious chili, mac and cheese, hot chocolate and coffee before posing for a group photo.

We are very fortunate in Andes to have these devoted and skilled fire department volunteers who take additional training to keep us safe. Contact Dale Tait, Chief, if you would like information on joining the Department. 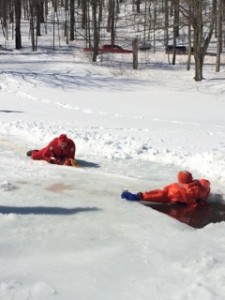