Taking a trail not traversed since last spring I approached a bluebird box that apparently had been torn asunder by one of my black, furred friends, Ursus Americanus, or as I like to now call him, “Makwa.”  Much time had passed since the assault, so I was unable to determine when the incident took place and whether or not an adult, young or eggs had been lost. The box parts will be collected, reassembled and reinstalled, a task for early spring; most likely in a new location which will be, hopefully, off the radar of Makwa if that is at all possible. Many boxes abandoned after nesting and rearing season remain a target, apparently as the attractive odor lingering in the box stimulates Makwa’s superb olfactory senses and results in determined dismantlement.

On this same trek I took note of a small hemlock tree that I had planted many years ago. Although growing slowly it always appeared healthy and vigorous, but it was now being assaulted by a quilled neighbor; a porcupine. The tracks led back to an abandoned trailer on a neighboring property where porky apparently would take respite during daylight hours. Deciding to protect the tree from further damage, I wrapped it in plastic tree protectors and took the extra step of surrounding it with a wire basket, al-though I felt bad about denying this critter his sustenance. This was unnecessary as it turned out. According to fresh tracks in the snow the next day, porky had surmounted the barriers and continued gird-ling much of the crown. Shall I use the “lead alternative” as porky is not an endangered species and, because of the wooly adelgid, our hemlocks are? Am I a pragmatic manager of the natural world around me or a jerk with too big a heart? This to be decided.

On another short jaunt around on a beautiful crystal-clear, blue-sky day, 15 degrees, fresh overnight snow perfect for tracking and hoping to find sign of a surviving cottontail rabbit, I found none, not a track, not a scat. I did note that a fisher had come down one of my trails, circled a pond and instead of doing a short cut across the ice, checked all the edge cattails, for what I do not know, but for sure some kind of foodstuffs – a rabbit? He eventually bounded back up through the woods to more lofty terrain – no sign of a kill. One kill I did note was that of a wandering mouse taken either by hawk in daylight or an owl under the cover of darkness: wingtip impressions on either side of the little guy’s last track with a spot of blood centered.

A fresh snow can tell you of many unwitnessed sagas. As I approached a thick brushy hillock, surrounded by Norway spruce, there came the chirping of a disgruntled ruffed grouse. Apparently upset by my approach, it escaped without going airborne over the crest and into and below the low branches of the spruce trees without my getting a glimpse. That evening after the unsuccessful search for signs of a bunny, one ran across the front of the house as I washed the dishes. Oh well, they are out there, scat or no scat, fisher or no fisher. Wash the dishes in a sink with a view for real wildlife observation.

Other interesting things of note just to break our winter ennui were: a fox according to his prints in the snow was attracted to a bird in flight above the garage roof upon which he was able to jump at a place where it was but two feet above ground level. This, I guess, led to his great chagrin and disappointment as it turned out to be the copper goose gracing our weather vane. Then there was my questioning of the morality/sexuality of a large tom turkey in full strut, out of season, chasing and consistently pestering a young tom turkey which is called a jake. Was he a pedophile, or just a bully? The rest of the flock was in a crabapple tree feasting on last year’s dried-out fruity remnants and paid no heed or moral outrage.

Some may remember my sightings of a mature barred owl and a young one this past spring on the “Barred on the Bend” location. I have not seen one since, and was delighted to hear from local friends who made their own sightings: Wendell reports, “While at my window I had the good fortune to see one land at the edge of the woods. He visited for about 20 minutes, a study in stillness save his rotating head. 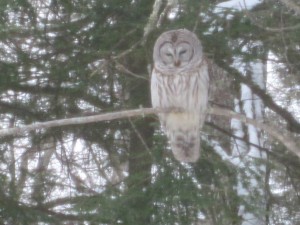 After a few pictures I watched him patrol my yard looking for those little critters that scurry across the open, hoping ‘my’ rabbit wouldn’t be so unlucky. Lo and behold, he returned to the same branch on the same tree the next day. Ah yes, life is good in ‘my wilderness’”. Ann’s observation: “At dusk out walking I saw one a ways away and stopped to look at it. Next thing, another flies over and lands a little closer to me and they hoot to each other. Then a third comes even closer. Then the three of them hop from branch to branch coming closer and closer to me, all the while hooting to each other I assumed, or maybe they were talking to me – who knows? In a tree right in front of me they were moving up and down and hooting and hooting. I could only imagine what they were saying to each other, ‘What do you think this odd creature is? I dunno, what about you?’ They may have been nest mates recently fledged. This went on for 20 minutes, I think I was the one who eventually said I have to go and broke the spell. I love them.” Considering all this, it appears to me that observing and appreciating our natural world can result in eloquent writing!~

“The beauty of natural religion is that you have it at all times. It is of today, it is now and here, it is everywhere. It is not faith; it’s a love, an enthusiasm, a consecration to natural truth.” John Burroughs