Any day, when ambling along the Bussey Hollow trail and approaching what we call Pearl’s pond, the sound of a bunch of mallard ducks busting out had become a common occurrence through mid-December. The timidity of these ducks made me believe that these were not the mallards that had become a common sight in the Freshtown parking lot waiting to be fed by passersby. In fact, it is my belief that these ducks were migrants from far away north where there is no or minimal human presence. Hence their fear and rapid exit when I or my hiking neighbors came by. There were as many as 16 of these guys at times, and none have been seen since December 20th. Therefore, I am presuming they are now further south, enjoying a warmer clime, and most likely a wetland sans people. Let it be said that this has been the latest we have seen ducks on any of the ponds; climate warming? 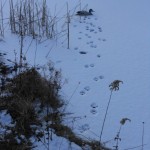 Alert! So much for my brazen thought that these guys were further south. On December 30th they were back. Truly amazing! Today, January 1st, on a stroll nearing the pond, which was ¾ frozen over with a small strip of open water, apparently caused by movement from the entry flow to the exit, and I presume their constant dabbling, there they were: all of them facing away and unaware of my presence. They were dabbling about, like I said, in search of whatever green stuff they could find for sustenance. I backed off, so as not to disturb them, as they believe this is their pond and they are alone. I was not about to interfere with that.

On January 2nd there were seven drakes and no hens, apparently unaware that sooner or later they will be frozen in. (See photo of my frozen-in plastic drake decoy in another pond investigated by a hungry, but disappointed coyote.) Incredibly, on January 7th, with an overnight temperature of -4°, there were six: three drakes and, yes, three hens.

On other strolls I often make it a habit to take much-needed respite on an overlook with a handy bench on site, of course, where I can observe from a few hundred yards the body of a dead and decomposing deer. With a handy pair of good binoculars I will sit and watch the avian circus of feeders that it draws. First are the crows and very noisy ravens with their cawing and “kronking” communications and flurry of feeding activity, at the same time always on the alert for danger, this from the occasional bald eagle perched as apparent sentinel in a nearby hardwood tree. The eagle flew down once while I was observing all this and made known his dominance, with the crows and ravens feeding still, but at the edges now showing great deference to the “boss.” The cadaver is now long gone, having fed many a bird, and no doubt also many a furred scavenger under the cover of darkness when they are most active.

This observation reminds me of a strong and very socially incorrect feeling I have about us very smart (I sometimes wonder) Homo sapiens and our own foolish way of disposing of our passed loved ones. Rather than feeding our fellow hungry critters in the wild we instead bury our bodies, often adding formaldehyde, where they decompose slowly while potentially contaminating our precious aquifers that we depend on for drinking water. If I could have my way I would have my dead body laid out in a field where my wild friends could enjoy a natural gift from me to them. (Is this delightful thought printable, dear editors?) I presume there would be many upset hikers coming upon the occasional human skull grinning at them. Well, so much for this idea. 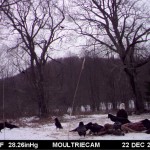 On eagles: I was delighted to observe two mature bald eagles sitting shoulder to shoulder high in what I call the roosting tree close by the nest on the Dingle Hill bluff over the Pepacton Reservoir. This is an indication that mating season is close by and they will be doing their aerial courting acrobatics really soon. They have been known to fly high in the sky, meet talons to talons and pirouette and disassemble just prior to impact with the earth, something I have never witnessed, but sure hope to one day.

As to the title of this piece, I have always considered myself a conservationist. So, just what is a conservationist? In my mind, not Webster’s, it is one who observes, enjoys, cares for and manages our natural resources using good stewardship. That basically means using those resources properly for our current benefit without wasting or destroying them, so that they will remain viable and be there for use and enjoyment by future generations. The NYS Conservationist, a magazine printed by the NYS Department of Environmental Conservation, and to which I have been a subscriber since my teens, in their December 2014 issue, highlighted two excellent articles: one on our “Fearless Fisher” and one on “The Golden Eagle,” this one by a friend, Tom Salo of the Delaware/Otsego Audubon Society. He explains the continuing research being done on the Golden Eagles here in our Andes environs. Both these articles are extremely informative about two local and iconic species. To anyone interested in the fauna and flora of New York State and the efforts to protect and conserve same, I recommend subscribing to this great magazine.

Once informed of what appears to be a truth based upon the scientific method, I believe it is okay to be opinionated, along with continued critical thinking and open-mindedness, seeking new discoveries that might force one to change one’s mind without fear or embarrassment. A politician who flip flops for these reasons should not be disparaged.~