Back not too long ago when it wa

s a comfortable temperature, conditions just perfect for sitting quietly in the forest watching and listening for happenings in the natural world, a world away from the clatter of everyday life, I was doing just that on a very late windless and silent afternoon when what sounded like a branch falling from a tree permeated the silence. This was strange, considering the lack of wind that might dislodge a dead branch. And then there was another and I realized immediately that what I was hearing was not by any means falling branches, but wild turkeys flying up to roost for the night. I began to count as more went up and was pretty confident that there would be either six or nine, as I had recently been observing two flocks of such numbers cruising the area for whatever sustenance the fields and forest floor might yield. There were nine and as the last made its loft I thought how cool it would have been if I had a friend with me from the Big Apple and he being totally unaware of such phenomena in the natural world, and me predicting accurately how many there would be or even maybe even telling him how many branches would fall. My thoughts reveled in this brief avian interlude.

On the morning of November 21 the war of the worlds (turkey worlds) occurred on the front lawn. At this point in time I had noticed that there were three flocks bantering separately around the house, front and back, and with the bird feeder not yet up and no seed scatterings to attract them, it appeared that the birds were after the very green grasses that had emerged after a couple of inches of snow had cleared. I chalk up this intense foraging of the grasses to the fact that what little there was this year of hard mast produced by the oak, beech and black cherry trees in the woodlands had already been eaten completely by the deer, bear, squirrels and the turkeys themselves, so that all that remained for sustenance were the grasses. Well, what happened was a first timer for this intrepid wildlife observer. Suddenly there was a very loud, and what could only be described as a chaotic, cacophony of every sound that turkeys are known to make including loud gobbles, chirps, yelps, cackles and what almost seemed like screams as at least thirty of them including toms, hens, jakes and jennies attacked each other with what appeared to be out-of-control vengeance and fury. It seemed that each was attacking whatever bird was close by with no compunction as to who might be friend or flockmate; each at this time was considered the enemy. Wings, beaks, spurs, all were weapons and under full employ on whomever happened to be nearby. The racket and fighting was something I would never have considered possible in the avian world. This incredible riot lasted at least ten or fifteen minutes. Finally they broke back into three separate flocks and with a couple of individuals limping,  and all seeming on high alert, went their own, and not too merry ways. It appears that in the tumult of war, human or avian,  there can be a loss of conception as to who is the real enemy. 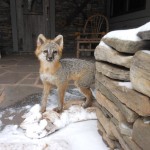 We had a small fox visit our breezeway on the night of the first snowfall according to his paw prints in the snow. He was obviously cognizant of the fact that the stone wall surrounding it harbors many mousy critters which are a prime food source for a canny fox. This little guy, I do presume, was a gray fox and not a red, as it is the grays that can escape up a tree with their retractable claws to avoid their arch enemy the coyote which seems to detest another canine in its territory. The red fox is unable to climb and are more in danger of coyote predation. Coincidentally, just back from the taxidermist is a small young gray fox that was subject to the devastation of our toll roads where much of our wildlife is vulnerable, no matter the species. This tragedy occurred on our Tremperskill Road about eight months ago. Since his little body was basically intact I salvaged it and it is now reincarnated, standing proudly on my desk.

Buffy, it is difficult to tell when our black bears will go into den as the timing relates mostly to when their food supply runs out, rather than how cold it is, as most people think. One would need a good handle on the mast crop which is their main source of body fat in the Fall. When that runs out, in to den they go, sows first. So determining this takes keen observation of the supply of acorns, beechnuts and apples in the forest and, of course, the number of yet to be harvested cornfields. A bird feeder downed in February? Yes, bears have been known to awaken from their slumber midwinter and take a stroll around. If your feeder happens to be along their path you can be assured of a take-down. Just think of it this way – you getting up from a long slumber and grabbing a midnight snack.

“Nature is neither friend nor foe, neither malevolent nnor benevolent” Alan Lightman in the N.Y. Times~