I call them my stopover ponds because they have matured and weeded in with cattails and other aquatic vegetation to become the perfect and secure habitats for migrating wood ducks and other species. There are a few that are vernal pools. 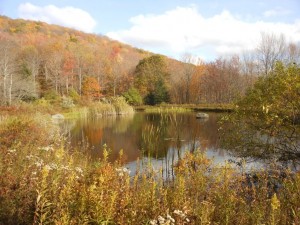 These are small and so shallow that they will not sustain any fish species, thus making them perfect for breeding amphibians such as frogs and salamanders, protected from fish that would eat their eggs. These ponds and pools were constructed over twenty-five years ago, with the knowledge that it would take time for them to become natural parts of the local and very dynamic ecosystem where the local and migrating critters would find them comfortable and accommodating. That time has come. Over the years ducks of many species have used them for respite during their long and arduous journeys south. This year was incredibly rewarding, as I observed multitudes of our beautiful and very skittish wood ducks take advantage of the welcoming ponds. During one late October day there were three, and the next none, and then nine or ten, and when they left new groups or rafts would arrive in varying numbers. All this culminated on October 25 when I made a very conservative count of at least fifty with rafts numbering up to fifteen; I had to count fast as they all made very hasty liftoffs upon my unwanted appearance. By the way “rafts” of ducks is a term likened to a herd of deer or a flock of geese, even a murder of crows.

Another very exciting spotting in the aquatic environs was a common egret, a beautiful white wetlands bird that was roosting on a partially submerged log that had been put in place just for the purpose of attracting such creatures. This was only the second sighting of this species and of course it was airborne and out of sight as I fumbled to get my camera in place; oh well, at least I saw him. 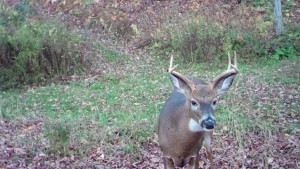 When you read this, gun season for deer will be in full swing. There is in effect now a DEC regulation that states that to be a buck for legal taking it must have at least three points on one antler, this so that many immature one-and-a-half-year-olds get a pass resulting in a better mature buck/doe ratio. One young buck that I have observed, and that may not make it through this season, is a four pointer (or what is called a fork horn) who has had the bad luck of growing a small one inch extra point on his right antler, making him legal game. I know that if he was aware of this he would be making an all-out effort to rub,` or somehow break off, that damned point. I wish him good luck! There are, or at least were, two full eight pointers that have done some aggressive sparring which was caught on one of my trail cams. They both are a hunter’s dream and may now, or soon be, venison stew. I am not a gun hunter so they will not wind up in Nancy’s pot and I do hope they at least have had a successful and enjoyable rut. 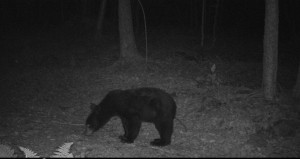 AN ODE TO “MAKWA”

You are the rambling and rarely seen black furred beast that some love, some revile and some seek for trophy or sustenance; to me you are merely a cog in the natural ecosystem that I find interesting and displayed in both my front and back yard and of which I write. I enjoy knowing that you are present and enjoy our rare encounters. You have some habits that I must admit I find annoying, so please if you would: tip not my benches, chairs, and barbecue and resist breaking the branches of my apple trees in order to secure your lunch. Tip not those large stones onto my trails. Feast not on my neighbors’ corn. Leave my bird feeders for the birds and, especially, do not false charge when encountering my hiking friends, and more especially me, on a chance meeting. In my lifetime I have killed three of your kind with my bow and arrow and twice I have given you a pass as you ambled by. I have braked strongly twice as you crossed a highway, saving your butt, so I do ask that you consider the latter if a chance encounter is to occur. So, Makwa may we live in peace, share the landscape, enjoy our lives lived to the fullest, and most important, while respecting each other. As it is that time of year, retreat thee to the security of your hidden den and if you are a pregnant sow, nurture your young and reenter the world in the spring with new lives, all to luxuriate in our hills and hollows of Andes.

You are our black bear, Ursus Americanus or “Makwa”: this from one who shares with you the sanctity of our wild forests.

Stay well and be safe, Human, Homo sapien, or “Jack”~