TABLE OF CONTENTS CHAPTER ONE: Dinner at the Taj Mahal — November 2014

A concept offered by Mary Overly Davis at a library fundraising meeting gave birth to the first rollout of themed dinners produced by a library supporter with all proceeds accruing to the library. The inaugural event of what is hoped to be a series was a grand Indian dinner hosted on October 10th by Dorothy Lyman at Red Hen Farm. Chef Dorothy was aided by Mary and volunteer servers Judy Garrison and Karen Levey in serving a multi-course meal for 16 at 2 tables in her living and dining rooms. 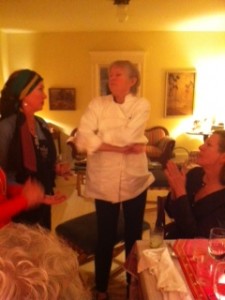 The guests were helped to beverages as they entered, and after a cocktail time mingle and nibble of pappadums and nuts were seated for the first course of freshly cooked samosas and pikoras, accompanied by naan, raita and homemade chutneys, followed by a bowl of lentil dhal. The cook and servers then rounded the tables with overflowing platters of basmati and jasmine rice, chicken tikka, roasted lamb that had been long marinated in a yogurt spice mixture, and vegetable and chickpea curries. Diners could choose the dishes and amounts that appealed to them, with second helpings encouraged. Indian music played in the background and lively conversation bubbled over the candlelit, artfully decorated tables. One happy guest, Karen Miller, commented, “The exotic glow, designer touches, table and lighting, warm welcomes, the creative, caring team, provided each guest a sense of personalized, exotic luxury. The food? Beyond fabulous.” 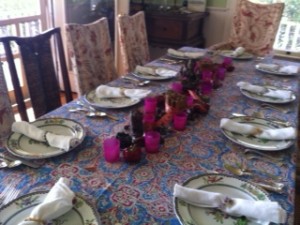 Seemingly sated appetites made willing allowance for the dessert course of kheer, a delicious rice pudding made with ingredients that included pistachios, rosewater and sultanas, along with homemade cookies. Guests left with a takeaway copy of E.M. Forster’s A Passage to India, the title of which encapsulates the transporting evening experience, and Modernist Art from India donated by Linda Dunne of the Rubin Museum of Art.

The fundraising committee encourages others to step forward with their own themes and plans. The person or group holding the event is responsible for all costs, and determines the price of tickets, the venue and the maximum number of attendees. Anything from an outdoor picnic to an ethnic meal is fair game. Talk to a librarian or a trustee if you have a proposal for next year, or wish to host an event. Our creative team would be delighted in assisting you with ideas. We all hope for more. No book is complete with only a Chapter 1, no matter how spectacular and successful.~