Back on September 22 I read on the BBC Headline News about a horrific black bear incident in a wildlife preserve in New Jersey. Apparently four young men from a local college were hiking in the preserve when they noticed a black bear following them. They split up and ran in different directions from the bear. This was a grave mistake, as they should have remained together, made a lot of noise, and backed away, this being the bear confrontation protocol advised by most, if not all, bear experts and biologists. Sadly the bear tracked one of the kids, attacked and killed him. When the police arrived at the scene, the bear remained and circled its kill in an aggressive and protective manner. The police shot and killed the bear.

New Jersey has a very high number of bears per square mile, probably the highest in the northeast if not in the country. Hunting seasons for the bears in Jersey have historically been quashed by the antihunters; the season has been opened for the past few years, but not in this particular preserve. One of the reasons for the attack put out by the New Jersey Wildlife Department is the fact that the mast crop is minimal in the region and the bears are very hungry. I would also add that with a dense human population and too many bears in close quarters, the bears will have little or no fear; in fact they will equate humans with food, i.e. garbage. Incidents such as this will always be possible.

I emailed the news item to my hunting and hiking friends and got a number of responses describing their own bear encounters. 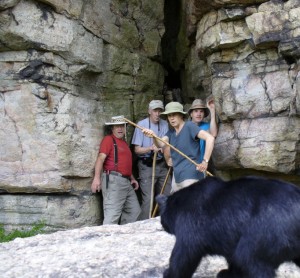 A hunter friend described how twice when entering the woods to hunt deer with his bow and arrow in New Jersey he was “false charged” by a bear. This is when a bear makes a full charge at you and at the last minute, fifteen yards or so, stops and turns away, this apparently to let you know not to enter further into his space. I will admit if this ever happened to me I would probably have a heart attack. Another mentioned that a friend of her grandson had been killed by a bear just two weeks ago in Montana. Possibly this was a grizzly bear, a much more aggressive species. A Roxbury friend reported that a neighbor out foraging for mushrooms was charged, and even when yelling and arm-waving the charge continued, finally ceasing at very close quarters – another very scary “false charge.” Up at her stone house overlooking the Pepacton, 25 years ago and relaxing on a stone planting pot this lady friend saw a bear pacing just below her. Backing away, stone pot held for protection, bear in hot pursuit, she made it to her house and closed the glass doors resulting in the bear, paws up on the glass, looking in. Finally, after some frantic yelling, the bear turned and made off into the woods. Her cat which had been beside her returned later under the cover of darkness.

Another local and avid hiker relates many encounters with our black bears and even some with grizzly bears in Alaska. This gentleman is still with us and drumming along to a very appreciative audience here in Andes. He states, “I have always enjoyed the times they hung around….as well as being pleased that at some point they decide to leave.” A friend who resides on Dingle Hill had a bear come down her driveway, and when she yelled and waved it just looked at her. This ended when her two dogs gave chase and stopped at the top of the driveway. The bear returned and this time the dogs gave chase deep into the woods causing frantic yelling for their return which they did, where they were now remanded to the house. The bear reappeared. After much barking he left for good. Begs the question: Did it return after darkness?

Many years ago, hiking with my Dingle Hill friend, Ann, descending Wittenberg Mountain, we came across a bear which bolted up a beech tree. Her dogs made for the tree. The bear decided that it was better to come down and hightail it. With the dogs in hot pursuit and Ann behind the dogs, yelling “I’ve got Cheese.” Seems the word “cheese,” a doggie favorite, was key to getting the dogs back. Didn’t work; but eventually and luckily they, the dogs and Ann, all came back sans bear damage. No cheese passed around.

Two of Marty Liddle’s round haybales have been torn asunder by the mighty “Makwa”. This for fun or the enticing smell of dead critters caught up in the bale — I don’t know.

And then finally there is this from a literati friend: “Then there is the most famous (infamous?) stage direction in Shakespeare: ‘Exit, pursued by a bear.’ The Winter’s Tale Act 3 Scene 3.”

There was a special early September two-week season for bears in the Catskills and West of Hudson Valley which, according to the bear specialist at the DEC Stamford office, was very successful as 250 bears were taken. Many were considered nuisance bears as they were taken in and around farmers’ corn fields where they were wreaking havoc.

To my delight wood ducks, our most beautiful of all ducks, have been making many stopovers in the ponds, groups of three, six or just two. The males are a delight to see, especially now, back-grounded by the fall colors. These ducks are not like your average friendly mallard. They are extremely timid and wild, taking flight almost instantly when I arrive on the edge of their pond.

Another rare sighting was that of a very orange young bobcat making its way around the edge of one of the ponds. It was spotted by my son from our dinner table. He flew out one door and I the other. He was able to track it unseen, but as I came out it had emerged from the brush, immediately spotted me and went into retreat mode. Still, a rare and exciting sighting for both of us.

I hope everyone has enjoyed this very beautiful fall in Andes. Be sure to show respect for Ursus Americanus or “Makwa,”; those remaining will now be seeking shelter in den hideaways.~