Onto something more uplifting: having been a keen fisherman and very successful, at least in my own mind, I find it dismaying to see the specimens for sale and consumption in our local grocery stores; the sunken yellow eye, shriveled skin, the likes of which my buddies and I would consider poor fodder—even for shark bait. Yes, even sharks like their fish fresh. Nancy and I are spoiled fish consumptionists (new word) having dined most of our lives on fish caught and eaten on the very same day. Now, living only a couple of easy miles from our Pepacton reservoir and with an ardent fisherman for a son, we have been the recipients of fresh-caught and filleted smallmouth bass for consumption the same day. The reservoir has great brown trout, but also the smallmouths which are really gourmet and a very fine harvest. I suggest giving them a try; fish, catch, fillet, fry and gourmet dine while sipping a small, cold glass of Chardonnay. 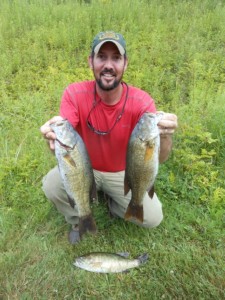 On my approach to the lower pond with its heavy lining of cattails I was delighted to see a kingfisher on the other side, obviously unhappy with my presence as I had interrupted his fishing expedition. But what really blew me away was the rise out of the cattails of a heron-type bird slightly smaller than the ubiquitous blue heron, but with very dark tan back and wings. The bird did an aeronautical maneuver which brought him down into the thick marsh on the other side of the pond without giving me a front view. I was perplexed as to the identity of this creature. Could it be a color mutation of a great blue heron? I later checked my Guide to Field Identification of Birds of North America and no heron-type bird filled the bill. An email to my friend, an expert at the Delaware/Otsego Audubon Society, resulted in “most likely an American bittern”. I checked the guide again and the coloration wasn’t quite right, but Googling it up resulted in a “voila” moment as among the multiple of pictures, at least forty, there were a number with the exact coloration, hence Botaurus lentiginosus or American bittern! Had the dude shown me his front side which he concealed during his escape flight, I would have seen the diagnostic brown and white striped chest. Still, with small effort it resulted in the 111th avian species noted on the property in the past 28 years.

September and brush hogging certain fields, avoiding those heavy with milkweed only for the sake of our disappearing monarch butterflies, always brings some guilt as the small rodents and wood frogs race, hop and leap to what they feel a safe place from the roaring monster and so many times in the opposite direction of safety. The guilt can only be assuaged by concentrating on the fact that in the natural world there must be death in order to have life. Of course lies the question, is brush hogging natural? The gathering of turkey vultures in high trees observing the massacre looks like an enclave of morticians discussing how best to dispose of the cadavers. This brings to mind another assault, at this time of unseen critters, and that is when I add to the aging brush piles of tree trimmings that at least in my mind are probably loaded with many nesting sites. Applying the new and often very heavy load begs the question: how many little guys are down under there wondering what kind of crushing calamity is going on? Having been a hunter all my mature life, it is very odd that I have become such a heartfelt old man, with my demise, hopefully years off; of course you never know.

Other recent sightings of note: A small black rat snake that was concealed and contentledy curled under an old rotting American chestnut log that I was moving from the driveway. This is the first of that species that I have seen in the Catskills.

On the subject of snakes, my son who lives in Kerhonkson, had a full grown timber rattlesnake curled and basking in his backyard, this the third he encountered in three days of hiking the Mohonk Ridge. For those that have a rattlesnake phobia I have heard of none in the Andes area. The closest I have seen was one on Mount Tremper. Rattlesnakes are benign creatures, but don’t tread on one as there most likely would be retaliation. Moreover, it is an endangered species protected by the Endangered Species Act and they are not to be disturbed in any manner.

My neighbors Rich and Allison, who are ardent birders and observers of nature, related that they had seen a monarch butterfly, this just after I had mentioned that I had not seen a single one this year and was holding off brush hogging some small fields that are filled with milkweed. My friend Joe observed two very large coyotes running in tandem across the Tremperskill Road. Some are now beginning to call these large predators coywolves because of their size and especially because of the grey wolf genes that many have as a result of interbreeding with the wolves as they migrated through Canada passing over the Great Lakes. The final and very unusual sighting on the property was that of a golf ball lying alongside one of our trails. Is there a trespassing duffer out there somewhere? Mel, I have not sighted any new or unusual plant species, but if I do you will be the first one I will call. And finally, there has been, not a mountain lion, but a small MOUNTAIN TIGER spotted lounging along Bussey Hollow! 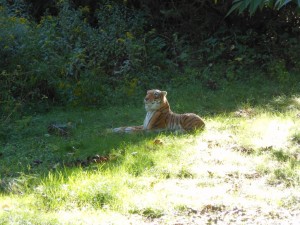 Nothing better, communion with music and immersion in nature, carpe diem.~