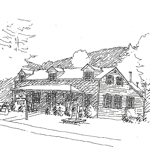 August was a busy month at the library. Our reading group, the “LitWits”, gathered to discuss Me Before You by Jojo Moyes, a book some were surprised to find they truly enjoyed. For movie night we showed the animated film Frozen, and, true to anecdotes I had heard, a number of viewers left singing and humming the music. Bill Piervincenzi regaled those at August’s Italian Circle with a fascinating talk about Leonardo DaVinci and flight, which included an enthralling demonstration of a homemade version of DaVinci’s flying machine, and a small but avid group gathered one evening to attempt a game of canasta in the hopes of finding they enjoyed it as much as they remembered from days gone by and possibly spur interest in others to join the fun. I found myself salivating over some of the beautiful pieces of Depression glass that Bobby and Deb Abbate installed in our display case, and am looking forward to hearing more about the subject when Bob leads a program later in the month. Lest we forget the younger set, Laurie McIntosh set up a stimulating children’s program called Finchbots, at which the little ones were able to manipulate robots from computers.

For September, the book of choice for the “LitWits” is Peace Like a River by Leif Enger; they will be meeting on Thursday, September 4th at 5 pm. Movie Night is scheduled for Thursday, September 11th at 7 pm (film to be determined), and the Italian Circle will gather on Thursday, September 18th, also at 7 pm. Story Hour continues each Wednesday morning at 11 am. For more information on any of these programs, or if you have a program you would like to see added to tour repertoire, please call us at the library at 845-676-3333.~