This past summer has been for me one of many wildlife sightings, both alive and some, sadly, road-killed and many caught on trail cams. Yearling bears have posed for the cams and one also survived a near miss on the road near Belleayre Mountain. That one attempted a crossing, saw my car and decided to run alongside for a while as I slowed and hit the blinker button which caught the attention of the car behind which also slowed, the bear crossed behind me, which was a show and not a collision for the folks behind. It is always a good idea to put on the blinkers to alert others when wildlife is spotted on road edge; one never knows when the critters will make the leap. Another tip that works for me is to have the brights on even at dusk when there is much wildlife movement, especially deer, as they help you see their reflecting eyes and also keep your peripheral vision acute. 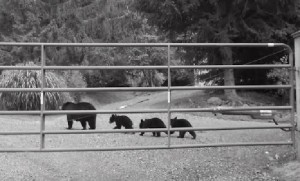 Somehow for me the words “road kill” are often quoted as I seem to have a great interest in what I see killed on our – what I call “toll roads” referring to the toll they take on our local wildlife. I see, count, sometimes examine, and even collect that which I might somehow preserve by taxidermy, such as a beautiful young gray fox which has been delivered to our local taxidermist and eventually will live on in my home sans flesh and bone. Considering all this personal wackiness I am now thinking of an addition to my lexicon that defines me and a very few others as a “roadkillologist”. My plan is to have the folks at Webster’s add and define it this way: “One who is overly infatuated with those wild beasts and critters, their identities and numbers, which have been struck and killed by vehicles now cruising through what was originally their own uninterrupted habitat”, or maybe just: “Those looking for death”. By the way, as I continued my drive with the gray fox secreted in trunk, I saw a friend, Dr. Michael Kudish, a retired forestry professor up at Paul Smiths College where my son Kris attended, backpacking along the road. I pulled over and showed him my collected gray fox, and surprisingly he stated he had never seen one before al- though he had seen red foxes mostly in the Adirondacks where he taught. I told him how the grays have retractable claws which enable them to climb trees and avoid being eaten by coyotes. Dr. Kudish explained that he was going to hike the length of Route 30 along the Pepacton Reservoir and monitor and map the various forest types along the way. See his next article in Kaatskill Life. 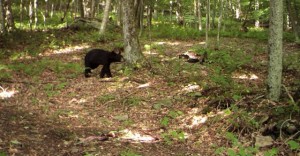 So now, who is this brutish invader of our property on Bussey Hollow? One who enters and sometimes remains doing great damage, such as flipping large stones over, landing in the center of trails, making them difficult to mow, turning over benches along the trails placed there for rest and comfort while hiking, pulling down bluebird boxes and tearing them apart, climbing the few wild apple trees that are fruiting this year and breaking sturdy branches to reach an apple. What monster of a madman is this? A great and lumbering beast clothed in a black coat of fur and scary to many, the mighty Ursus Americanus or black bear known to the Algonquin as “Makwa” actually a rather gentle creature more inclined to run like hell when encountering a human. Watch out Blackie: The DEC has now extended the season on your species, as they feel you have become too numerous for human comfort. To this I disagree, as I welcome your presence, tolerate your occasional rock and bench flipping, bird box and apple tree wrecking antics, since I recognize you are only seeking sustenance. My rare glimpses of you are always exciting and what I always tell my friends that have great fear of encountering you on the trail, “Relax! Enjoy a rare sighting and grab your camera.”

I believe I am seeing in my lower pond, nature doing what it does best, and that is bringing about an ecological balance. For years I have rued the day when I included pumpkinseed sunfish in with my largemouth bass stocking. Why? Because this breed of sunfish is a fish egg-eating variety that wipes out all attempts of the bass to successfully nest and multiply. What should have been put in with the bass are bluegill sunfish which are primarily insectivorous and do not prey heavily on the bass eggs. Since Ollie the otter entered the picture a year and a half ago things have changed, and I am seeing bass reproduction in a couple of small clouds of bass fry (young). My very lucky observations of Ollie’s successful fishing expeditions: He always surfaced with a pumpkinseed and never a bass. It is my feeling that the depletion of the pumpkinseeds has been the major factor in the now successful bass reproduction–just my theory of nature in action. Now if the great blue herons, mergansers and kingfishers can somewhat restrain their appetites, I might have a growing bass population

Here’s what I say to my very collegial and fellow raconteur Mel who rants about the damage to his beloved flora by our ubiquitous whitetail deer and suggests a program that will inhibit their mass proliferation through a program of pheromone baited traps to capture dimwitted males leaving only brainiac cousins to do all the breeding. Long term I believe that this program would fail as it would eventually result in the progeny all being smart enough to avoid the traps. In place of this attempt to alleviate his problem, I suggest that he savor the flavor of barbecued medallions of venison and harvest the critters. Come by Mel, and I will treat you and Peggy to some of nature’s excellent non-vegetarian bounty.

“We come and go, but nature is forever. It puts us in our place, underscoring that we are not lords of the universe but components of it”. Nicholas Kristoff

Alert: It is being reported to this author that Makwa has been ravaging many chicken coops on Dingle Hill.~