A father leaves three children—four-year-old twins and an eight-year-old boy—in a car at the top of a hill while he walks down to get the mail. One of the children lets the clutch out, the car rolls down the hill and kills the father. This incident gives rise to most of the trouble in Elizabeth Strout’s latest novel, The Burgess Boys—or seems to. The three children are at odds their whole lives. They quarrel and are mean to each other. They are unhappy and have lots of problems. But in the end, it isn’t really because of the accident. The accident is just Strout’s way of representing the nature of existence. If it hadn’t been the accident that caused the trouble, it would have been something else. The way she sees it, nothing in life is easy, smooth, or self-explanatory. 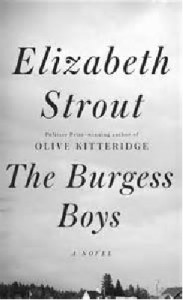 The Burgess Boys is not tightly structured like Abide with Me, an excellent earlier work of this author’s, nor is it a series of beautifully wrought stories about the same handful of people, like her Olive Kitteridge, which won the Pulitzer Prize. (If you haven’t read these books, I recommend them). The Burgess Boys sprawls, moving from place to place (chiefly between Brooklyn and a small town in Maine) and back and forth among a large, somewhat ill-assorted cast of characters (there are a group of Somali refugees who never seem to belong either in the town in Maine where they’ve landed, or in the novel, where they were put on purpose by the author). Unfolding in fits and starts, the plot sometimes moves quickly and at other times idles in place. To me it all felt somewhat ungainly, until I realized that ungainliness is what the novel is about.

Life is not elegantly structured, the author seems to say, but moves according to its own invisible impulses, with plenty of jolts, lulls, exhilarating interludes, and slow, difficult passages. The characters tend to be enigmatic, unpredictable, and not easy to identify with—at least not at first. There is no ideal figure, nobody you would immediately say that that was the person you wanted your daughter or son to marry; there’s no one who doesn’t do or say things that are hurtful, embarrassing, or mendacious. Some of the characters you feel more or less comfortable with right away, others it takes a while to warm up to, and one or two you never care for at all.

Jim Burgess, the eight-year-old in the car at the time of the accident, belongs to this last category. On the outside he is handsome, well-dressed, professionally and socially successful, the kind of can-do, always-to-be-relied-on father-figure American society has taught us to admire, the person who takes charge whenever there’s trouble. What could be wrong? Well, plenty, it turns out. His gradual unmasking and eventual undoing drive home the novel’s main point: that in this life there are no such people—perfect specimens of appearance and behavior. Or, as another character remarks, “You think your children will be like the ones in the Sears catalogue. . . . But then they aren’t.” If there are any heroes—and there are some in this book–they don’t look anything like the collar-ad person we’ve mistakenly been trying to emulate all our lives.

Instead, the author asks us to give our sympathy and admiration to people who are marginal, who wield little or no influence, who are not very well-off, are beset by inner and outer difficulties, and quite often incompetent. These are the characters who, sooner or later, come through in ways we can feel good about and even learn something from. To be ungainly, maladapted, somewhat of an outsider, even a loser, is not, in this novel’s scale of values, a bad thing. What matters is where you come down when the going gets tough. What risks you’re willing to take to do the right thing.

One character who epitomizes Strout’s the-last-shall-be-first-and-the-first-shall-be-last view of humanity is old Mrs. Drinkwater who has been abandoned by her children (she made the remark about the Sears catalogue). She rents a room on the upper floor of Sue Burgess’s freezing cold, sparsely furnished house in Maine. Sue is one of the twins from the accident and a main character in the novel. Mrs. Drinkwater, who stays home all day, dressed in an ancient pink house-coat, her stockings rolled up below her knees, appears completely useless. But she understands things. For instance, Mrs. Drinkwater understands that Sue yells at her son because her husband has left her. She doesn’t judge. When the son, whom Sue has raised by herself and whom she loves desperately, leaves her to live in Sweden with his father (her ex) and Sue is utterly cast away, it is the upstairs, apparently good-for-nothing, old lady who comforts her and makes her life bearable.

In their sympathetic depiction of how people feel as they go about trying to fix, or avoid, their problems, Elizabeth Strout’s novels offer a vision of life. That vision is redemptive, and yet leaves out no jot or tittle of ugliness, meanness, shame, despair, and long-endured pain. It teaches us that, though when seen from our own perspective, our case may seem hopeless and our struggles vain, this may not be so from the perspective of a compassionate observer. It all depends on how you see things. A passage from Micah (6:8) that I came across recently while reading another book sums it up: “What does the Lord require of you? To act justly, and to show mercy, and to walk humbly with your God.” If you do this, even if you can’t do it perfectly or all the time, Strout is telling us, you have nothing to fear, no matter how things may look on the outside.

Strout herself never mentions God—the closest she gets to religion are some ministers, a rabbi, and an imam, who try to make things work between the immigrants and the townspeople. But her good characters manage, though not without stumbling, to act out the biblical instruction.  When Bob Burgess, the more sympathetic of the two Burgess  boys, comes to stay with Sue, he says to Mrs. Drinkwater, “if you’re too cold, you should tell Susan.”

The old lady moved to sit down in the wing chair. She pushed at her glasses with a bony knuckle. “I wouldn’t want to complain.  Susan doesn’t have much meney, you know.  She hasn’t had a raise at that eye shop for years. And the price of oil.” The old lady twirled her hand above her head. “Mercy.”~