At a certain age there is more waning than waxing, so as I wane I take comfort in waxing somewhat philosophical or at least gaining more interest in the philosophical. Other than my own response in last month’s column there were many other comments in response to Alan Lightman’s OpEd about the purposelessness of nature in the New York Times. Some that I consider poignant follow: “[Nature’s] purpose is to create more life, and viewing nature as a separate, inherently unfriendly force to be manipulated, we place humanity’s very existence in peril.” With this I very much agree. “It’s time for us to relate to one another, communicate and act as a species – one that needs to act in its own best interests.” To this I say, “In order to protect our own best interests we should protect the functioning natural world as best we can, particularly by not overwhelming it with our own population numbers that in the process kill off many other life forms.”

Let me now wane into some more relaxing and entertaining local observations here in Bussey Hollow. There are six mature Canada geese honking from pond to pond and hanging out on a surprisingly amiable basis. The two nesting on an island in one of the ponds have lost their nest to an unknown predator, the norm for many years. Now with no goslings or nest to protect, they have ended their hostility to others and are getting along peaceably with passersby. A small green heron I spotted in the cattail marsh at the edge of a pond was only the third sighting of this species in twenty-eight years. An unusual wild turkey hen is sporting a beard which normally only adorns the Toms. Along with her two normal sisters, she makes almost daily trips to forage the bird seed now hand-distributed so as not to attract the Bruins.

Speaking of Bruins, one took down one of our bluebird houses which was inhabited by a brooding tree swallow. Feathers of mom and eggshells were all that remained. I was saddened, but happy it was not a bluebird. This shows my preference and prejudice for particular species, a human trait but not necessarily a right one. I am using the term Bruin when referring to Ursus americanus or black bear, in the way often used by writers who are hunters as an alternative to Bear as “Bruin” sounds more threatening–think cuddly Teddy Bears and all that; there are no cuddly Bruins–thus making it more acceptable by the general public to accept the ‘management’ of them. Our DEC is also in the habit of using the term “managing” bruins and deer, when they actually mean hunting, knowing that vernacular has impact on the general public. The male bluebird, on constant vigilance and oversight of the box by the house, in which his mate has been doing brooding-duty over five eggs, was observed The male making a very heroic attack and chase of a red squirrel that was attempting a home invasion. The red squirrel has not been back. There have been as many as nine painted turtles sunning themselves on their favorite log in their favorite pond, never unnerved by the occasional passing goose also logging on. Today, May 29th, taking a break from this writing, I went up to harvest some ramps prior to their all turning brown, I came upon a very pregnant doe that stood and stared at me and seemed to be saying, “please leave as I am about to give birth and here is my private place.” I did. 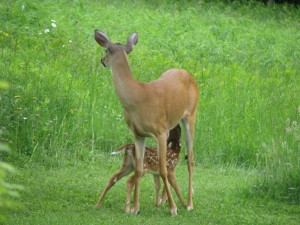 An interesting, but very blurry photo taken at night by the trail cam, located at the exit stream from the lower pond, was that of a bobcat crossing and carrying something with open and seemingly very live eyes. My first thought was it was a freshly taken rabbit, but further scrutiny got me thinking that it was one of the cat’s kittens being moved to a new den location. I hope it was the latter. Other night shots include two woodcock doing a potential mating ritual. woodcock is known for a sort of unusual evening and nighttime act of flying straight up, then doing a kind of tumble down, this to impress the local ladies. Their plaintive “peenting” is often heard, but to many of us of unknown origin. A night shot of a doe with a very newborn fawn, which seemed to be perplexed by its appearance.

I received a very encouraging note from my friend Mary McKeon that stated that the D-Con rodenticide would be taken off the market next year. This is very good news as rodents poisoned by D-Con, an anti-coagulant that kills slowly, are often able to get outside before dying, making it possible for the dead rodent to be consumed by wildlife such as hawks and owls and other meat consuming beasts, including pets. This will be a victory for the natural world and I wish it were off the market today. If you have some please dispose of it properly.

On a humorous note, while doing my act at the physical therapy department at Margaretville Hospital, I and a couple of other “inmates” were being entertained or harassed (a better word) by a very large bumblebee as it buzzed around and made attempts to escape through a screened window. My first thought was to remove the screen to allow escape, but it was screwed on tight. I thought to cut a hole in it but common sense said don’t do that. Finally I got a small plastic drinking cup, put it over him and slipped an index card between it and the screen. Angry buzzing emitted as I carried him out passing some folks saying, “Just kill it!” When I released the little guy in front of the hospital, he immediately turned and faced me in midair. Was it a thank you or a threat? I’ll take it as a thank you. Mel Bellar, I know you’re a plant guy not a wildlife guy, but you do need these little creatures to pollinate your precious plants. You’re welcome.

“All should reflect on what we seek from life, to recognize the importance of passions as well as paychecks.” Nicholas Kristoff in the NY Times.~