A Maxfield Parish sky, no doubt about it. I think that even though I would not choose those colors on my own, they are, indeed, the essential colors to pull off this spectacular sunset. I would have chosen, was waiting for, rose, but pink is what it is, and pink is happening.

I don’t know why I have an avoidance of pink. I will blame John Wayne. He was certainly part of the programming in my single digit years. But I was barely out of single digits years when I realized that I was not going to become a player in the NFL, so maybe I should not pull John into this.

Whatever, I am loving PINK this evening.

It is May 17th and this is the day that weather, time, and finally a repaired John Deere “lawn tractor”, with a pto switch! I might add, achieved a synchronous place in the universe to allow me to mow the various lawns, and trails—many of which had achieved well over a foot in length, actually making hay rows.

That, along with gathering stones, then building a stone retaining wall for a new rock garden bed, making soil where little exists, then planting an arm full of perennials—that have been sitting under plastic for weeks, protecting them against temperatures in the lower 30s, plus a lot of . . other stuff. I have released myself to a glass of wine and the beginnings of “the sunset.” I sit on the deck, I walk along the trails. I merge.

I heard a large tree drop while working this afternoon—obviously the two day wind and rain storm abetted its new relation to the earth. I wanted to locate the tree, for the sound of its fall was quite impressive. A glass of wine, and binoculars—in case an Orange Spotted Purple Pimpernel alighted on a nearby branch—I set off into the woods.

I was thrilled to walk under a volunteer pear in full bloom, then over rocks as large as cars under which seasonal mountain streams rushed dramatically. Not far beyond that I found the tree.

It was around 2 feet in diameter and broke off around 3 feet above the ground. I was amazed that it stood at all, for there was maybe an inch of wood surrounding  a long hollow run that disappeared in the darkness about 6 feet into the log. In the base where it broke was a rather deep pile of mouse scat and the shells of cherry pits, each uniformly severed in half. I was surprised to see only one woodpecker hole, and only near the top of the tree was there an opening with a nest.

It had broken into several large sections and its fall severed a red maple about 6” in diameter, which in turn took down the top of a wild apple tree in full bloom. The old tree now lay amongst wild lily of the valley, foam flower, and the occasional red trillium and jack-in-the-pulpit.

I felt sad. This tree that lived so long in difficult conditions was now brought down where it would continue to rot into earth. Its hard-won life in rock and sun nourished a structure that would now support a new generation of plants and trees as it transformed into soil—its own life-force having long ago released the matrix that created this form. Nevertheless, the weathered patterns of the tree captivated me, the beauty of pattern and form— these patterns connect across species and make for the rich web of life that I embrace. This is my favorite art, filling me with peace and wonder.

Perhaps I was over-reacting. I spent yesterday afternoon with a friend who has stopped all treatments of her cancer. She mentioned how she thrilled in the unfolding of the spring ferns, almost by the hour.  I raised my glass to toast the tree, to toast my friend. I raise the glass to toast the universe and myself.

What an intriguing, embracing life hums above these Pepacton Waters and beneath ever changing Maxfield Parrish skies in the lovely town of Andes. ~ 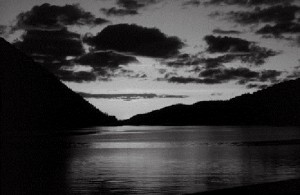