Yes, wait for it because it won’t be long now until John Schulman and Scott Finley bring the Two Old Tarts restaurant/bakery home to Andes where they met each other and live with their 8 dogs. 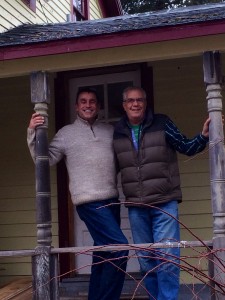 John Schulman and Scott Finley decided to move their restaurant to the previously owned Slow Down Cafe behind the Mercantile Building in the heart of Andes, much to the joy and excitement of many of its residents. Not to mention residents of Delhi, Bovina and Margaretville. Barring unforeseen surprises, the contractors soon will be finished completing an addition, so that the restaurant/bakery can open Memorial Day Weekend, or hopefully no later than the second week of June.  While Scott and John liked the Bovina location where they served breakfast and lunch, they are planning on changing to lunches and comfort-food dinners using seasonal foods. Another addition will be breakfast/brunch on Saturdays and Sundays.

Though the dining area will be doubled, and a deck added, the homey atmosphere will be maintained. Old favorites will be served along with some new surprises so that people will feel as comfortable as before hanging out and spending time with their friends

What future plans will be in the works? For one, after you round off your wonderful meal with a good cup of coffee or tea and a slice from one of Scott’s fabulous tarts, you can amble over to the building behind the restaurant (the former Lee residence) that will open on a date to be determined as a home-goods/gift shop.  Another future intention will be picnic grounds on top of the newly landscaped ridge. You will be able to call ahead and a packaged lunch can be prepared for you.

Hard to believe that the providential meeting of two people led to a space in the Pakatakan Farmers’ Market where people lined up for almond croissants and other goodies only to have them both leave for California for several years.  After their return,  people who knew them from the Farmers’ Market greeted them with enthusiastic questions such as, “When are you going to bake again?” and, “Why don’t you open a shop?” and that evolved into you-know-what. 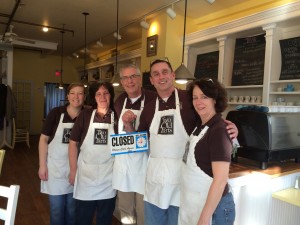 Two Old Tarts Staff As They Close up Shop in Bovina.

There are rumors that there has been a run on sleeping bags by people who intend to snooze on the line the night before opening. Chances are that ain’t gonna happen.  But who knows ?~