Aissa O’Neil runs a small farm called Betty Acres a few miles up Route 28 from the Andes border. In 2006 she became an apprentice in cheese making to Linda Smith of Franklin, whose goat cheese was probably the first local farmstead cheese sold commercially in the central county.

In March 2013 Aissa opened her own cheese making operation, which she calls Modern Milkmaid. The two cheeses I sampled and purchased on a recent visit were both made from the milk of her small herd of grass-fed Jersey and Guernsey cows and aged for 7-8 months in her mountainside cave. The Delchego, with a 100% natural rind, and the St. Placide, made in the French tome style, with a natural rind of smoked paprika and olive oil, are both rustic and delicious cheeses that would pair well with a simple meal of apples, grapes, and a red wine. 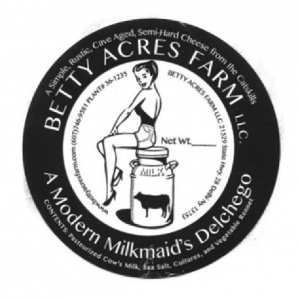 Aissa is currently selling her cheeses, (including a fresh cheese ideal for adding to salads) to Mario Batali’s Eataly and to Whole Foods in New York City. The cheeses can be found for sale nearby at Good Cheap Food, Lucky Dog Farm Store, the Wednesday Delhi Farmers Market and the Saturday Pakatakan market. ~