Submitted by Gene and Mary Shaver

When Gene’s brother Allen J. Shaver, Jr. passed recently, at age 80, living in Durham, North Carolina, Gene and his wife Mary felt it fitting to share some memories and family background as, according to them, Allen never missed reading an issue of The Andes Gazette, and read it cover to cover, as they do. 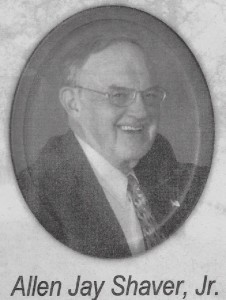 Allen was a direct descendant of the first settlers in the region in the late 1770s. Josh, Adam and Peter Shaver settled on Shaver Hill, and among them had 3 farms there. The main homestead still stands on Shaver Hill (where Rosalie Glauser and Bob Murray now reside). Many of the Shaver descendants continued to live in this area.

Allen grew up in Shavertown and went to Andes Central School. After school Allen delivered local farmers’ produce to New York City markets. He also delivered stone used to build the Pepacton Reservoir. He later joined the U.S. Army (1953-1959) which trained him in radio communications which became his career, and in Germany met Eva, who survives him. She became his life partner and wife of 58 years. He enhanced his capabilities in the communication field by studying engineering at the California Institute of Technology. He retired at age 65 from Kaiser Permanente. His favorite place of all was Andes in Delaware County. He made annual trips to the Catskills, which he regarded as the best place in the world.

As a young boy he recalled accompanying his grandfather, Jay Shaver, who owned the Shaver homestead, to his lawyers, to see what he could do to save the local farms and homes from being consumed so entirely by the New York City water supply. As history shows, nothing was possible to save the valley.

Jay lost some of a lower meadow, while retaining other land, but for many years felt the sorrow of seeing fellow farms, the beautiful countryside and the little hamlets disappear. Allen’s birth home was flooded.

Allen will be coming back to be buried at the Shavertown Cemetery near the family’s first settlement. Dorothy Andrews of Andes is a cousin, and other relatives live in the region. He is survived by 2 sons and families as well as his brother, 2 sisters and cousins. ~