Crawford Brothers, the well known wholesale feed dealers of Hamden, have taken over or purchased all the real property owned by the firm of Armstrong Brothers in Andes. This property includes the Mill and Store buildings in the village and the large feed store at the depot…..Mr. Armstrong will continue to conduct the business at the Shavertown store. 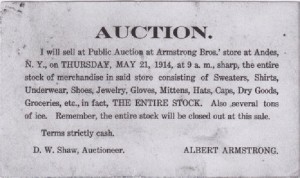 Alexander W. Fenton has purchased what is known as the Dr. Wight drug store building on Main street in the village of Andes. Mr. Fenton will at once repair and re-model the building. [Jim Andrews: I’m thinking this is the Paisley’s/John Gregg building. Dr. Wight had an office in the back of the store at one time. I know it was George Norton’s prior to Roy Miller buying it.]

Owing to the furnace being under water no services were held in the United Presbyterian church last Sabbath.

While in New York City last week Jas. W. Dickson, through the invitation of Harry Dowie, attended a luncheon of the Merchant’s Association of Greater New York at Hotel Astor, at which 600 plates were laid. [JA: Harry Dowie was the butter merchant and James Dickson at that time owned the former Dowie corner store—probably they did business together.]

Sabbath afternoon the Andes station of the D. & N. narrowly escaped damage by fire. Soon after the arrival of the 4:30 train, and as A. L. Carman, the agent, was preparing to go home, the coal stove in the office tipped over and scattered the large body of coals on the floor. Mr. Carman promptly seized a chemical extinguisher and by scattering its contents among the coals held the fire in check and then procuring a shovel carried the coals out of doors. One leg of the stove had become loosened and this was the cause of the stove going over. Five minutes later Mr. Carman would have been out of the building and the chances are that the station would have been burned The railroad company had only sent the extinguisher the night before. [JA: Stoves of this type (usually potbellied) were rather large since they had to heat the office and the waiting room, so contained a pretty good amount of coal. The stove had also probably been banked for the night. Lucky for the building that Mr. Carman was still there. I’ll bet he had to move pretty fast. The chemical extinguisher was most likely a metal tube containing dry chemicals with a pull top–when the top was removed, the contents were sprinkled at the base of the fire. The Presbyterian Church still has one such extinguisher which has hung in the vestibule closet for well over 100 years.]

The Andes Co-Operative Dairy Company have been compelled to go to the expense of putting machinery to cook or pasteurize their milk. This is another hobby of the New York board of health and high authority condemns it as not being as healthy as it is in the way nature furnishes it. ~