Alligators in B-Flat is not the kind of book I’d normally reach for if given a choice. The title is crude, grabbing for attention, and the great big ugly picture of an alligator’s snout on the cover doesn’t help. It’s a collection of columns about Northwest Florida that once appeared in the Tampa Bay Times. How good could it be? Well, it turns out, very good.

The author is a seasoned journalist who has honed his skills; his sentences are taut and packed, his timing perfect, he knows how to choose the right quotation, the most telling detail. But what makes this collection of pieces distinctive is something else–something extremely precious and hard to pin down. I could say, at the risk of cliché, that it has heart–a human warmth and generosity toward its subjects that is hard to come by. Klinkenberg refrains from judging his subjects; he gives them air and space so that they seem to be speaking for themselves. His attitude is appreciative and celebratory rather than analytic or interpretive, or even expressive—he makes comments and jokes around, sometimes at his own expense, but never imposes himself. The people and places he describes seem to stand forth on their own. Still, these features don’t really explain what makes Jeff Kinkenberg’s work stand out.

He writes about Thunderman, a blind man who loves thunder, talks about it endlessly, makes recordings of it, predicts the weather by it, and listens to it whenever he can, transfixed. He writes about Flip-Flop Man, who runs and walks from place to place all day and sometimes all night, always in flip-flops, travelling an average of 6,500 miles a year. Flip-flop Man has trouble standing still. Klinkenberg writes about the black men in Florida after the devastating hurricane of 1928 who were expected to clean up the wreckage for no pay. Column after column, I wanted to keep on reading, wanted to keep on having the experience I was having because, though he stayed in the background, I liked being in this man’s presence. I wanted to accompany him day after day on his researches, to meet the woman who trapped alligators for a living, the man who ground corn for grits in an old-fashioned grist mill. I wanted to cook and eat those grits.

Though he focuses on what is distinctive about each person he describes— their special contribution to the world—he doesn’t gloss over the hard parts of their lives: the poverty or sickness, the mental illness, broken families, the deaths. He captures the one-of-a-kind-ness of the people he interviews, conveys a sense of their passion, their obsession.

When he talks about a place he’s been, he makes me want to go there: for instance, the only restaurant in the 725,000-acre Big Cypress National Preserve, Joanie’s Blue Crab Café:

Things happen at Joanie’s that probably never happen at another restaurant in Florida. Like the time I was wolfing down a bowl of lima bean stew at dusk and a bear showed up behind Joanie’s to devour her garbage. “I didn’t know Florida had any bears,” said the patron who almost knocked me over as he fled the porch nearest the bruin.

Klinkenberg has a sense of comedy bordering on farce. And he likes to make fun of himself:

“‘Of course Florida has black bears,’ sniffed the middle-aged pedant, yours truly.” He regrets the standardization, the flattening out effect of big corporations and chains:

With so much of modern Florida pallid and boring—lacking any appreciable sense of place—it is always a pleasure to visit the hinterlands and find that Joanie’s is exactly as I left it: dimly lit, cigarette butts standing at attention in the back porch ashtrays, the possibility of encountering something reptilian on or off the plate. 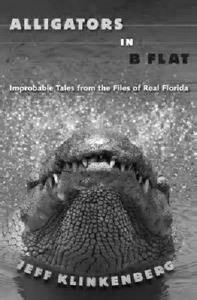 I had never liked Florida. I began to think I’d been wrong.

This man sees places, sees people. Lots of writers can write eloquently about their subjects, but it’s rare that a writer can create the impression that his words are a transparent medium through which we see what he sees without any mediation at all. He gets out of the way. And what is left is an essence that is something like pure joy.

Reading this book, I began to see more clearly than before that there is a moral quality, an effect of character, that is always coming through writing, that imprints itself on the mind and soul; as you read, you can feel your attitudes towards things being re-shaped by the experience, so that for a while, the way you see the world will be different, and better. This is not something a writer can fake, or even intentionally strive for. This kind of writing is an extension of one’s being. Klinkenberg describes the friendly atmosphere in Joanie’s café where there’s no air-conditioning– “Joanie liked natural ferns and natural air”:

Her loyal regulars, as long as I have been going there, have included cane-pole fishermen stinking of bream, Miccosukees who like her fry bread, and legions of foreign tourists who have worked up an appetite by counting alligators along the road. “I parlez-vous with people pretty easy,” Joanie told me.

I’d love to have written a paragraph like that.

Jeff Klinkenberg is a writer whose motto could well be the same as that of the poet William Carlos Williams: “no ideas but in things.” He doesn’t have an ax to grind or try to persuade you of anything. He loves the old Florida of working men and women. There’s hardly an upper middle class person in the whole book. No talk of money or real estate or politics or religion. Not even jobs or education. If he has a gripe, it’s that the era represented by Joanie’s—little mom-and-pop joints with personality—is gone. His genius is for seeing the essence of a person or a place—or an animal. The second section of the book is titled “Critters”: that’s where you learn about the male alligator’s affinity for B-flat. He has a feel for the distinctiveness of things. The people he writes about are not necessarily nice, few are what you would call successful, they don’t wield a lot of influence, they certainly don’t have much money, and their health probably isn’t that good. But each one has some quality that is so poignant as to be unforgettable. “I parlez-vous with people pretty easy.” It’ll be a long time before I forget that. ~