Lili is an indoor cat. She’s never been outside in all of her almost two years. When I first brought her home and had her checked by the vet and given the necessary shots, the vet told me that indoor cats are healthier and live longer than those who run free and can be attacked by predators or pick up diseases from other animals or from eating things that are not good for them. I didn’t want her to eat the birds that I love to watch from my glass doors in the kitchen or to run out onto Route 28, in front of my house, and get run over. 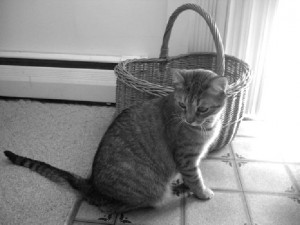 She’s been a wonderful pet. Her mother taught her well in the first few weeks of her life, and she came to me knowing better than I could ever have taught her, how to use the litter box and how to keep herself clean. I don’t have to take her for walks, late at night, in all kinds of weather as I would a dog, and she’s content to watch the TV shows that I like, although, I notice that she’s much more excited about “Nature” than “Downton Abbey”. If I sit in my favorite chair to read or write, she’s sure to jump on my lap, on top of the book, making it difficult to do anything but stroke her. When I say, “It’s time to go to sleep, Lili,” she snuggles right up beside me and appears to watch me as she spends the night sleeping and waking but always watching until I wake up in the morning, when she follows me to put the news on, brush my teeth, make her breakfast, which she eats while I eat mine and begin our day.

When our four girls were young, our family had all the usual pets: dogs, a cat, gerbils, mice, fish and turtles. I suppose I enjoyed them as part of our busy household but I never really became attached to any of them and resented the extra work that ended up as mostly my responsibility. As the girls grew up and one by one left home for their future adventures, I was relieved when the pets went too, but when my husband Alan passed away after our 55 years together, I felt the total emptiness of the house and everyone advised me to get a pet. There was always an excuse not to. I’d lose my freedom to come and go as I pleased. It’s such a responsibility. I’d have to walk the dog (which was what I would have wanted) at night, along Route 28, which would be dangerous and, who would take care of it if I were not able to?

One day, my daughter Amy called to tell me that her friend, Natalie, had found a cat in her barn that had given birth to five kittens. She took the whole family to the Humane Society, hoping that they would take them in, since she had several pets of her own, but they had only enough room for the mother cat and one kitten. Natalie took the rest of them home. Amy tried to convince me to take a kitten. “Just come and see them, Ma,” she said, “They’re so adorable!” I did. There was only one female among the siblings. She was different from her brothers. The males were orange and cream, striped and beautiful. They were playful and full of spirit. The one female was quiet and smaller than her brothers and had stripes of different shades of gray, rust and cream. “She’s the runt,” Natalie said, but when she came to me as I sat, cross-legged, on the floor, and settled into my lap, as if it was made for her, I could feel myself turning to butter. “Look, Ma, she loves you already! You’ve got to take her. If it doesn’t work out, I’ll take her from you.” Amy already had three cats and I didn’t doubt that one more would be too much for her.

When I got home with my new kitten, she looked into my eyes with her big, chartreuse, black-lined, soulful, trusting eyes and she made me think of Leslie Caron in the movie, “Lili,” sweet, quiet, feminine and beautiful. The song came back to me and I sang it to her and she became “Lili.” She follows me around the house but proves her independence (as cats do) by not ever coming when I call her name but only to the sentence, “Would you like a treat?” When she hears the basement door open, signifying my return after being gone for a few minutes, a few hours or a couple of days, I hear her soft mewing behind the door to the basement steps, welcoming me back. As I enter the house, she scrambles down the steps and then back up again, in utter joy.

Her favorite place to visit is the unheated, enclosed sun porch. No matter how freezing it is out there, she loves to explore between last summer’s flowerpots, the cushions from the outdoor chairs, piled on the floor, AND, last night, a new discovery… a mouse! (which instinctively she seemed to know what to do with). She played with it as she does with her mouse toy and it upset me to think she had eaten it but, I told myself, that’s what cats do, and I praised her though it saddened me.

In cat years she’s a teenager, or even more, so I suppose it’s time for her to find better things to enjoy. Today, as I opened the door to let her out to the sun porch, there was the little mouse, lying dead on the floor. I put him outside, under the snow and Lili went on to the porch to explore among last summer’s flowerpots.~