Is it spring yet? After returning from the Andes, the land of perpetual spring, in Ecuador, it was hard to get excited about the feeble attempts going on ‘round here’. Frankly I wasn’t ready for spring yet; with mounds of catching up to do, I was just fine waiting until April! I suspect that many of you may feel differently.

SO, I pondered, what muse might inspire me in this bleak March to write about gardening? I was greeted on my arrival home by house plants besieged with a variety of bugs. I just wanted to cut them all back and start over; not too much fun to write about. Also, I am not one to get excited about pouring through seed catalogs, dreaming of posies and cucumber vines (although there is nothing wrong with that). I want to get out there and take action. Cut things back, divide perennials, prune the trees, move that shrub and while I’m at it, how about putting some boulders over there with a fountain.

My muse, of sorts, came in the form of a beautiful sunny day in the 40’s. I put on my tall boots (tall snow) and decided to take a walk around the garden to look for inspiration. I felt like the ground hog; it was definitely not spring yet. I nearly fell several times on the ice lurking beneath the crusty snow and my feet got really cold. I wouldn’t exactly call it inspiration but I did learn some things and compiled a bit of a “to do” list.

The good news: my evergreens don’t seem to have any deer damage this year! Spraying Plantskydd, a very nasty blood-based product, once in November and again in January or early February, usually deters them from eating my beautiful conifers. However, last year I missed the second spraying and many of my previously untouched conifers, including some prize spruce (yes spruce) were mutilated! While my ultimate solution will be proper deer fencing, this is an expensive proposition and then there is the annoying issue of dealing with the gate. In the meantime, my hatred of the deer grows. They have no serious natural predators here and they are doing awful things to our landscape. If you haven’t seen it yet, google “wolves change rivers”, and watch an incredibly illuminating video that might just change your thinking as well.

To do: pruning! Fortunately, I love to prune. Revealing the hidden sculptural shapes in the trees and shrubs is truly gratifying. Mel’s musing of the day, “Be not afraid to prune”!! So many people are, but trust me it is not hard, you won’t ruin your plant and you just might discover that it is one of the most rewarding garden tasks. There are certain shrubs that do not possess that inner beauty, and I must confess that I don’t enjoy pruning them. In fact, I often let them go far too long.

On my inspirational walk I noted that I must tackle some of this type of pruning as soon as conditions permit. Included among the unruly shrubs in my garden are spirea, potentilla, philadelphus (mock orange) and weigela. The spirea and potentilla are pretty easy. If they are not too large and woody I take a hedge clipper (I use a machine but a hand tool will do) and cut them back hard. Not to worry, they come back nice and fluffy by bloom time. These guys bloom on new wood so they can be pruned in late winter or early spring with no repercussions.

Weigela and mock orange are more of a problem; they both bloom on last year’s wood and therefore cannot be pruned until after they bloom. By that time I am so busy that I can’t be bothered and end up with messy, overgrown shrubs. Also they require manual pruning; they are too woody for the hedge clippers. I promise to get to it this season! 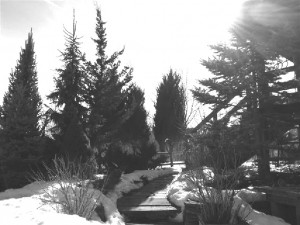 My trek took me past a couple of my Alberta Spruce that seemed to have severe winter burn. This concerns me. Last year some well-established specimens in Andes up and died for no explicable reason. After my inspirational walk, I went to the post office and noticed that MANY of the Alberta Spruce along the way had similar browning, including the ones in front of the Catholic Church. These shapely, well-behaved conifers often get a little wind burn that can simply be shaken or brushed off in the early spring, and then recover nicely. I love the Alberta Spruce because they have a naturally conical shape without any pruning and they are TOTALLY deer proof (something that can’t be said about almost any other conifer). I sure hope that there is not some blight on the loose amongst these beautiful gems.

Final discovery: my rail fence needs repairing. I guess a rail fence begins to suffer after 12 years of frost heaving and vines pulling on it. The posts have started to lean and the wood has shrunken to the point that the rails are starting to fall out. Oh well, we all shrink and lean a bit with age.

It looks like I might need to write columns on deer control and pruning. If you have suggestions for topics, I would love to hear them. You can email me at: mel@zone4landscapes.com. ~