On a very cold Sunday morning in January, seven people, myself included, joined up at the Andes Post Office parking lot, carpooled in two cars and headed north on Route 28 for the open field country above Otsego Lake and State Highway 20. This group of intrepid hikers and bird watchers was seeking a chance to view a large white bird rarely seen in our New York State. We were joined by a friendly and avid Audubon member, Becky Gretton, who had observed the bird roosting in a particular field and had taken pictures of it, which she showed us on her computer. Now eight of us proceeded to the area of her sighting which was centered in lands farmed mostly by an Amish community. We drove slowly around many mowed hayfields and pastureland interspersed with dwellings, barns, outbuildings and tractors, both old and new. Upon passing, we were always given a friendly wave by locals on and off tractors as we drove slowly, scrutinizing with binoculars all potential white bird locations, often interfering with pickup trucks, tractors and horse and buggies. After two and a half hours of banter and fruitless meanderings and with only the entertainment of horse and buggies and something special for me, a “McShane Road” sign which I photographed, not the white bird, but pretty cool anyway then we decided to call it quits. The “white bird” has been observed on Long Island, but is not enough to get this birder to make that trip.

So what is this “white bird” that enticed these Andes folks to take such a trek on a cold Sunday afternoon? Many of you may have guessed correctly: the Snowy Owl (Nyctea scandiaca). This winter along the East Coast, stretching from Nova Scotia to South Carolina these birds have appeared in record numbers and it is called an irruption (correct spelling). They have flown thousands of miles out of their normal Arctic range, showing up in search of food. It is thought that their normal food species, lemmings and voles, may be on a cyclic decline. Some believe the movement is tied to overpopulation. Either way, these beautiful birds are hungry and likely weak. As one nature writer in the New York Times commented, “Sadly for them this may be a one-way trip.” 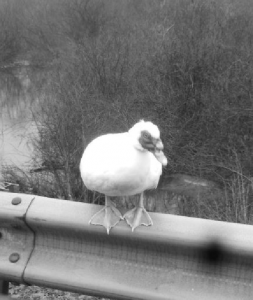 White Bird continued: Two days after the failed expedition seeking the “White Bird,” I’m driving on Routes 28/30 into Margaretville when there on the far-side railing a large white bird stood looking about. Knowing exactly what it was, I had to make a U-turn, and pull alongside it. Somebody’s pure white domestic duck had apparently escaped and was now roadside, posing for photo-ops.  Not quite what would be considered a great sighting by the birder community, but what the heck? 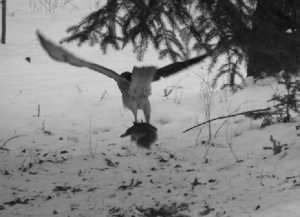 A late day in January, cold but with no snow on the ground, I was stunned to see four robins bobbing around on the open grass. That evening I received a call from my friend Lore who lives up the road and a small way down the other side telling me she saw four Bluebirds flitting about and even checking out one of her bluebird boxes. These sightings, a first for both of us at this time of year, are very unusual at our elevation and it does make one wonder what is going on. Maybe just a quirk in nature?  My friend Doris from over the hill in the next Hollow got a great shot of a hawk leaving with his kill, a gray squirrel. I could not identify the hawk and forwarded the shot via email to two friends from Audubon. They agreed: a redtail. Another note from Lore two days later letting me know that her birdfeeder had been taken down by a bear, tracks in the snow for species verification. Our black bears are known to occasionally, but rarely, wake from their winter sleep, emerge from their dens and take a casual stroll out and about, then return to their den to continue their slumber. I have my own intuitive feeling that this would only include boars or sows without cubs. If a sow with cubs were to do this in frigid weather it would be a death knell for the suckling cubs.

I am having great difficulty getting away from writing about white birds this trip around. Many of you have heard the tragicomedic act by the Pope, with children present. He hoped to symbolically release two “white doves of peace.” Things went awry almost immediately when one was attacked by a crow and the other by a seagull: Mother Nature taking precedence over any symbolic peace signal. A number of things crossed my mind: these were not doves but white homing pigeons that will under normal circumstances return to the coop or loft in which they were raised; doves are less so inclined. They would have been a lot safer had they been born in the wild with natural instincts of predator avoidance and natural coloration which was bred out of them for our aesthetic pleasure. Oh, well. 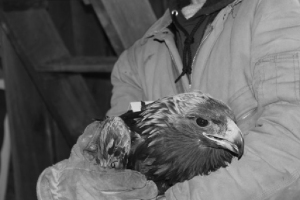 Saturday, February 8 at 7:30 am: an email alert from the Research Coordinator and former president  of the Delaware/Otsego Audubon Society, Tom Salo. There had been a great and long awaited success. A golden eagle had been captured at a baited research site right here in Andes. The bird was now being transported to the barn behind the Louise Redden home on the Tremperskill Road right in Town for blood sampling, GPS tagging and of course multiple photo ops by the Press and many very excited folks from the birding community. The eagle had been captured by Scott VanArsdale, eagle specialist from the DEC, who had spent many hours in sub-freezing weather waiting for the opportunity to release a net over the venison-feasting bird. After all the human handling, bloodletting, GPS attaching and short deprivation of freedom, this magnificent bird was released back to the wild. The GPS tracking will enable Audubon to have input into such things as appropriate wind turbine location. Bravo! Scott and your volunteer team on this well-earned and important success!

In Andes we may not have snowy owls, but we do have bald eagles and golden eagles and yes, bluebirds in January. Andes is special!